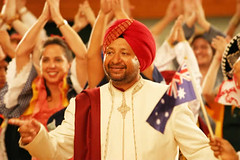 Brisbane’s famous singing taxi driver has hit the international stage with an appearance on the BBC World Service‘s Outlook program.

Many taxi users in Brisbane have already had the pleasure of a live performance by Indian-Australian Manjit Boparai, who is not afraid to belt out a few numbers to his captive audience.

Top of his hit parade is the patriotic, Punjabi-flavoured Song Australia in which he reveals his passion for his adopted country…

He emigrated from India in 1988 and took up taxi driving after moving to Brisbane in the mid-1990s.

Manjit’s hours behind the wheel have already paid off with an SBS Inside Australia feature and appearances on ABC radio in Brisbane.

He is also the subject of an Australian Film Commission-funded documentary due to go into production soon.

If you happen to pull Manjit for a ride, also check out his photo collection – including one of him with the PM – and just try and get away without buying a CD.

Keep your eyes peeled for the SBS-funded, Bollywood-style video which he says will feature Cathy Freeman.

He told the BBC that he hopes to get out of cabbing by the end of the year.

I live in Melbourne, Australia. I like anarchy. I don't like nazis. I enjoy eating pizza and drinking beer. I barrack for the greatest football team on Earth: Collingwood Magpies. The 2023 premiership's a cakewalk for the good old Collingwood.
View all posts by @ndy →
This entry was posted in Film, Music, Television. Bookmark the permalink.