Tonight’s the night that we got the truck
We’re goin’ downtown gonna beat up drunks
Your turn to drive I’ll bring the beer
It’s the late, late shift no one to fear
And ride, ride how we ride
We ride, lowride

And ride, ride how we ride

Pull down your dress here’s a kick in the ass
Let’s beat you blue ’til you shit in your pants
Don’t move, child got a big black stick
There’s six of us babe, so suck on my dick

And ride, ride how we ride
Let’s ride, lowride

The left newspapers might whine a bit
But the guys at the station they don’t give a shit
Dispatch calls are you doin’ something wicked?
No siree, jack, we’re just givin’ tickets

As we ride, ride, how we ride
Let’s ride, lowride

GRAPHIC video images of detectives beating and kicking a suspect in an interview room have rocked the inquiry into the Victoria Police’s disbanded armed offenders squad.

One of three detectives accused over the bashing collapsed in the County Court witness box yesterday after being shown the secretly filmed footage.

Another officer was warned against perjuring himself as he denied taking part in the bashing on the 11th floor of St Kilda Road police headquarters on May 10.

We all protected each other. When I arrived at St Kilda police station in 1985, no one spoke to me for months. It was explained to me that I was an unknown. I had not proven myself in battle (the streets). Could I be trusted? The brotherhood was at its thickest at St Kilda. The culture was such that you would not even think of blowing your nose, let alone any whistle.

The video, taken by a hidden camera installed in the interview room for the Office of Police Integrity, includes the voice of an officer threatening to remove the suspect’s ear. 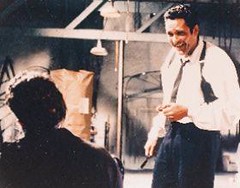 The video was revealed on the second day of open public hearings into the squad, which was disbanded this month.

Three officers who appeared yesterday — Robert Lachlan Dabb, Mark Harrison Butterfield and Matthew Franc — all denied assaulting the suspect, identified only as A100.

The hearing was told that a bungled search for the suspect’s sawn-off shotgun and his stash from a jewellery store robbery sparked a two-hour interrogation in which he was beaten with a telephone after asking to make a call, slapped repeatedly about the face and kicked while being held on the ground.

At one stage, the suspect is allegedly struck four times in time with the words “F—— … armed … robbery … squad.”

The video shows detectives telling A100 to decide whether to be “all friendly and co-operative” or whether he will do it the “f—— hard, hard, hard way”.

When he does not answer, A100 appears to be pushed to the floor and one of the officers says: “Welcome to the armed robbery squad.”

The video shows one officer, alleged to be Detective Senior Constable Butterfield, repeatedly hitting A100, whose ear was bleeding, before telling him: “That ear’s coming off by the end of the day.” 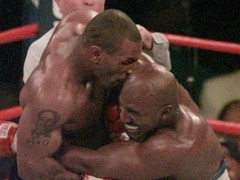 The former head of the squad, Detective Inspector Bernie Rankin, also allegedly enters the room and tells A100 it’s going to be “a long old day for you, pal” and that “it might be a lot less painful and a lot easier for you” if he listens to advice.

Detective Senior Constable Dabb told the hearing he was unaware that a recording device had been placed in the room. He collapsed in the witness box after being shown some footage.

A group of men in the public gallery rushed to assist, lifting him back to his feet.

Senior Constable Dabb pulled at his tie and collar as the men led him from the room, and resisted attempts by security staff to usher him back in, telling them: “Get your hands off me.”

Senior Constable Dabb’s lawyer, Rowan Skinner, later said a doctor had issued a certificate saying he was medically unfit to give evidence until Thursday.

Earlier, Senior Constable Dabb said accusations by the OPI against the squad, revealed on Monday, were scurrilous.

The other accused officer, Sergeant Matthew Franc, denied kicking A100 while another officer pinned him to the ground.

Hartog Berkeley, QC, who is conducting the hearing, told Sergeant Franc to consider his options overnight and to “talk it over with a good friend” before “perjuring” himself further.

Mr Berkeley refused applications by media outlets for access to the video images.

Sean Cash, for Sergeant Franc, said the images — which he likened to the notorious police beating of Rodney King in Los Angeles — could “overwhelmingly prejudice” any potential trial.

Police Association secretary Paul Mullett said the officers were still entitled to a presumption of innocence. He labelled the hearing and the OPI’s use of hidden cameras in squad offices as “questionable”.

The hearing continues this morning at the County Court.

Meanwhile, Premier Steve Bracks has defended the OPI’s decision to make the inquiry open to the public. He said a closed hearing would be “an usual circumstance” and the OPI had the discretion to hold open hearings under state legislation.

Ronald Reagan, October 3rd, 1972 : “I am very proud to be called a pig. It stands for pride, integrity, and guts.” Speech in Oroville, CA.

I live in Melbourne, Australia. I like anarchy. I don't like nazis. I enjoy eating pizza and drinking beer. I barrack for the greatest football team on Earth: Collingwood Magpies. The 2023 premiership's a cakewalk for the good old Collingwood.
View all posts by @ndy →
This entry was posted in State / Politics. Bookmark the permalink.