“Working class punk” : Strike a pose / There’s nothing to it

Blondien (not her real name) says she was walking alone to her car on Johnston Street the same night [as the Blood & Honour ISD Memorial Gig, September 23, 2006] when she was surrounded by about seven men. She says the men screamed abuse at her, calling her a black c..t and forcing her to repeat the insults.

“It’s disgusting that people would single out one person and you have to say stuff about your race to get out of it,” Blondien said…

Speaking of bullshit, on Friday March 2nd, The Blurters, Charter 77, PBG and Slick 46 are having a gig at The Birmingham; effectively scabbing on a boycott of the pub that was called for following its hosting of a neo-Nazi gig last year, and which resulted in the abuse outlined above. In doing so, the bands are joining the likes of The Assailants, Bulldog Spirit, Distorted Truth, Marching Orders (see below), Standard Union (Adelaide) and The Worst, all of whom have played gigs at The Birmy in the intervening period.

In practice then, and all posing aside, for some, being a ‘working class punk’ means acting like a racist Tory, and joining others — in this case boneheads — in shitting on other workers. In comparison to the violent antics of B&H in other countries, however, ‘Blondien’ may be considered somewhat fortunate. In Belgium last May, for example, a member of the Belgian branch of B&H shot two people to death in cold blood: a white baby and her black nanny. Members of his organisation were also busted by Belgian police ‘…in a Belgian neo-Nazi terror plot’ (AFP/Reuters, International Herald Tribune, September 8, 2006).

The continued support for The Birmy by some local punks is warmly received by local boneheads:

“It’s amazing how these cowardly dirtbags can even stand up without a spine. Gutless fags. The gig was brilliant: great bands, great people and a good time was had by all. UP YOURS FAG ANTI-RACIST VERMIN! GOD FORGIVES, HAMMERS DON’T!” — Hammerskin38 (Southern Cross Hammerskins)

Above : Blood & Honour gets the thumbs-up from David Innes

Introducing The Chunder From Downunder

Rock Against Communism (RAC) is another term for White Power muzak. It derived its name from the English organisation — a/k/a the White Noise Club — which preceeded the establishment in 1987 of Blood & Honour by Ian Stuart Donaldson (1957–1993). On Stormfront Radio Down Under — proudly hosted by LoudCity — RAC is a segment with David Innes (‘Baron Von Hund’), ‘Aussie Knight’, Innes’ partner — and SFDU moderator — Lilith Peterson, and Paul Innes (David’s brother, a/k/a ‘Steelcap Boot’) .

NB. The Chunder from Down Under explicitly violates LoudCity’s TOS:

5. Content Guideline: User agrees not to post, upload or transmit to the servers of LoudCity or to any third party server used for User’s webcasting any sound recordings, communications, text, graphics or other information (collectively, “Material”) that:

* is fraudulent, relates to hate-groups or other racist activities…

But, as is not unusual with TOS (see DreamHost and Redwatch), ISP’s tend to ignore them unless subject to popular pressure, and by gaining an awareness of the business (and legal) implications of providing a platform for racists and fascists to promulgate their filth.

LoudCity may be contacted here and via their email: sales[at]loudcity[dot]net.

The Chunder from Down Under not only features music from Battlecry, Blood Red Eagle, Bound for Glory, Fortress, Max Resist, No Remorse, Saga, Skrewdriver “and many more!”, it also features the musings of a bonehead from Blood & Honour Australia called Aussie Knight, who helps explain attempts by he and other neo-Nazis to destroy skinhead culture. The soundtrack to such attempts to drag the name of Skinhead through the mud is provided by bands such as (the English neo-Nazi band) No Remorse, which has songs with titles such as ‘Zigger! Zigger! Shoot those Fucking Niggers’, ‘Belsen was a Gas, Exterminate Ya!’ and ‘Zyklon B’ (from the album Barbecue in Rostock). Australian bands follow the trend. For example:

Reject an alien government, don’t recognise their laws
It’s time to close the floodgates, it’s time to shut the door
Repatriate, ship ’em out, send the bastards back
If they don’t fucking like it, it’ll be in body bags 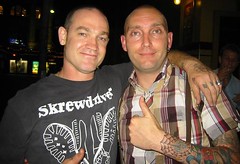 Doug Smith (above right), vocalist with Bulldog Spirit, also now plays guitar in Marching Orders. Bulldog Spirit’s drummer, Joel, is a well-known local Melbourne ‘skinhead’ (who also allegedly moonlights as the drummer for Bail Up! — one of the bands that played last year’s ISD Memorial at The Birmy).

The last word goes to Roddy:

“SHARP [Skin Heads Against Racial Prejudice], and more importantly the SHARP attitude, has had a massive influence on Skinhead culture. Remember how it used to be back in the eighties when the Boneheads nearly strangled the cult. Remember how kids thought to be a Skinhead you had to be a Nazi. If it wasn’t for SHARP and other groups like AFA, ARA, RASH and all the rest we would be swimming in a sea of swastikas by now. Don’t listen to all the shit about splits and politics, the Boneheads go on about it because they know how we drove them underground and reclaimed Skinhead culture for true Skinheads. The non-politicals go on about it because it’s easier than taking on the scum. I’ve been a Skinhead since 1969 and I know what it’s meant since day one.” — Roddy Moreno, The Oppressed

Oi! You stupid bastards just wake up
And think about
Where your culture comes from
Oi! It’s not just having fights
Dancing and drinking
Dressing up and owning many records

Oi! It’s fighting back
So you should feel
Like a suburban rebel
Oi! Social difference is the reason
Employees are still exploited

Oi! Fred Perry was a Jew and Levi, too
Black music
The movement source
Oi! Is kicking out the stupid racists
So let the kids be united
Oi! Don’t influence the younger ones
By telling much
Without saying anything
Oi! Skinhead’s not a stupid culture
Your’re not allowed
To switch your brain off

Oi! You’re singing songs about a teenage warning
About not showing the white flag
Oi! Don’t talk about a way of life
Though for you
There’s no deeper meaning
Oi! Is feeling pride
But just posing
Is no reason to be proud
Oi! So skinhead is a different thing
Your infiltration will be stopped

15 Responses to “Working class punk” : Strike a pose / There’s nothing to it