A revolution with a goal so fine
From ’36 to 1939
They say it ended that last year
But the fascists are still here
The war ain’t over and the battle ain’t won
The struggle, baby, has just begun
So fascist pigs start to run
We won’t forget what you’ve done

It’s a war between the classes
The privileged few against the masses
The Spanish anarchists said: “¡No Pasarán!”
I say we stick to that until the war is won

It seems that DreamHost’s arrogant dismissal of the legitimate concerns raised by numerous parties regarding the Los Angeles-based company’s hosting of the neo-Nazi site Redwatch Poland may now be coming back to bite them in the arse.

Despite declaring, on numerous occasions (in fact, whenever questioned by members of the public, including its own valued* customers) that the site is completely legal, it has been closed: presumably by DreamHost, possibly acting under the instruction or advice of the FBI or other US legal authorities (certainly in accordance with the public utterances of Polish authorities)…

Aside from the assaults upon Maciek on May 16 and Michael on (or about) May 27, the threats made towards participants in gay rights activism and left-wing journalists, what DreamHost dismally fails either to acknowledge or to understand is: i) the nature of contemporary Polish politics; ii) the presence of neo-fascists in the Polish government; iii) Polish history and, finally; iv) the importance of relations between the Polish state and the European Union…

Meanwhile, a beardy fellow by the name of Frank Fisher has the privilege of being the first journalist from the (shallow end of the) corporate sector to make comment on issues to do with Redwatch: that old chestnut ‘free speech’ being the main topic for discussion, natch. According to Frank, Redwatch UK is OK… at least insofar as, in his opinion, the site breaks no laws. Redwatch Poland, on the other hand — and seemingly on the basis of one report by IFEX — is not. The relationship between Redwatch and Blood & Honour — or Combat 18 for that matter — is barely mentioned in his report. Neither is the fact that DreamHost has apparently taken a unilateral action in closing Redwatch Poland down: no court has ordered them to do so on pain of prosecution, and DreamHost maintains its silence on the issue.

Not that mere denial will absolve them.

Perhaps Frank should replicate the actions he performed in solidarity with Green Anarchist, and republish the contents of Redwatch Poland?

Some years ago, I spent a few days laboriously HTML-ing small stories from the newsletter Green Anarchist that had themselves been gathered from local papers around the country. These detailed arson attacks on, mostly, businesses associated with animal exports or foxhunting. The editors of Green Anarchist had been jailed for inciting arson by republishing that material. Now, in solidarity with the jailed citizen/journalists, and to publicise their case, I was keen to republish it. They were eventually released on appeal (although via a legal technicality rather than on grounds of freedom of the press), but the case still left the law in an unsatisfactory state that is worsening week by week as the blogger blurs the line between journalist and activist.

After all, why not? In fact, one could almost describe this not just as a possibility for Frank, but a duty.

The other missing ingredient from Frank’s recipe for free speech is webhosting. In other words, what responsibilities does DreamHost (for example) have in regards to the content of sites they agree to host? Leaving aside any legalities, why should spam be regarded as a much more serious offence than expressing the view (for example) that Hitler was right and that ‘the Jews’ should be exterminated… starting with Maciek D?

Anyway, I’m quite drunk — believe it or not — and will stop now. 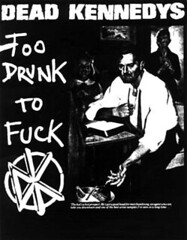 I live in Melbourne, Australia. I like anarchy. I don't like nazis. I enjoy eating pizza and drinking beer. I barrack for the greatest football team on Earth: Collingwood Magpies. The 2023 premiership's a cakewalk for the good old Collingwood.
View all posts by @ndy →
This entry was posted in Anti-fascism, Media. Bookmark the permalink.