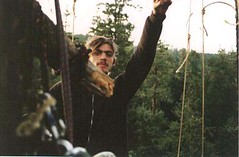 According to Friends of Jeffrey Free Luers, on February 14 the Oregon Court of Appeals unanimously ruled that Jeff’s case will be reversed and remanded back to the Lane County Circuit Court for resentencing as a result of Judge Velure’s errors in imposing the original draconian sentence. The opinion just came out this morning… but it looks like Jeff could potentially get about 15 years taken off his 266[!] month sentence… Congratulations to Jeff and his family!

Jeff was sentenced in 2001 to 22 years and 8 months in prison for the arson of the Romania car dealership in Eugene, [Oregon, USA,] and an attempted arson of Tyree Oil. The total damage amounted to burned tires on 3 SUVs: the tires were replaced and the SUVs were resold… Outrage over the unjust sentence spanned the globe [even extending to Melbourne!]. Jeff is currently imprisoned at the Oregon State Prison and the Civil Liberties Defense Center has continuously assisted Jeff with various legal matters during his incarceration.

For additional background on Jeffrey Free Luers, click here. The entire opinion may be read here.

In other news, while the Australian media remains happily trapped inside The Cone of Silence regarding his case, according to Bob Egelko, “A federal judge assigned a magistrate as a mediator Tuesday to try to resolve the case of Josh Wolf, the blogger who has been in prison nearly six months for refusing to turn over a videotape of an anarchist protest to a federal grand jury” (Magistrate will mediate case of jailed blogger, San Francisco Chronicle, February 14, 2007).

I live in Melbourne, Australia. I like anarchy. I don't like nazis. I enjoy eating pizza and drinking beer. I barrack for the greatest football team on Earth: Collingwood Magpies. The 2023 premiership's a cakewalk for the good old Collingwood.
View all posts by @ndy →
This entry was posted in Anarchism, State / Politics, War on Terror. Bookmark the permalink.