PRIME Minister John Howard was targeted by anti-war campaigners when he arrived for talks in New Zealand today, his political woes over Iraq following him across the Tasman.

[Three] people were arrested as about 50 anti-war demonstrators staged a noisy protest as Mr Howard arrived in Wellington, ahead of talks with New Zealand Prime Minister Helen Clark tomorrow.

But not, unfortunately, because The Little Digger — having already pledged to aid George II to the last man and the last dollar — was volunteering to send Richard, Melanie and Tim to Iraq, but because he reckons Senator Barack Obama is the answer to Osama bin-Laden‘s prayers. A bizarre concept. As a press release from PAW states:

Johnny boy has been up to no good. His contribution of troops to the on-going bloodbath in Iraq implicates him in the death of 650,000 civilians. As if that wasn’t enough, he’s also agreed to build a new uranium mine on Aboriginal land in the Northern Territory so that he can sell uranium to China. Needless to say, this might just give a little fuel to another nuclear arms race.

John Howard is George W Bush’s best “sheriff” in the so-called “War on Terrorism”. Tell John that racist, sexist warmongers are not welcome in Aotearoa.

Unfortunately, it appears that while racist, sexist warmongers are not welcomed by the public, they are welcomed by the police, who arrested three protesters and broke some poor bastard’s glasses. (NB. Mick Armstrong of Socialist Alternative has issued a statement condemning the protest, and claiming that between 20 to 40 anarchists from Australia were responsible for the broken spectacles…) 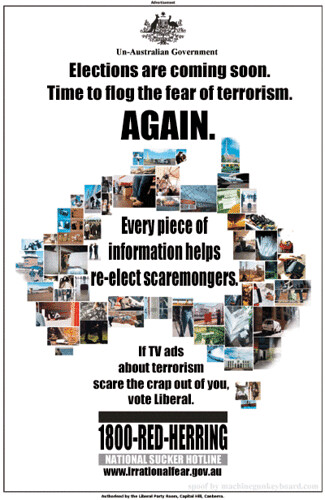 I live in Melbourne, Australia. I like anarchy. I don't like nazis. I enjoy eating pizza and drinking beer. I barrack for the greatest football team on Earth: Collingwood Magpies. The 2023 premiership's a cakewalk for the good old Collingwood.
View all posts by @ndy →
This entry was posted in State / Politics, War on Terror. Bookmark the permalink.