When Does Green Rage Become… 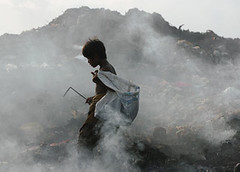 … “Terrorism is terrorism — no matter the motive,” FBI director Robert Mueller said in January 2006, after the Bush administration announced indictments in an investigation it calls Operation Backfire. “The FBI is committed to protecting Americans from all crime and all terrorism, including acts of domestic terrorism on behalf of animal rights or the environment.”

Many were appalled. How could anyone possibly use that singularly loaded word to describe these acts? Where is the moral equivalence between burning an SUV in the dead of night (and doing as much as you can, given the nature of the business at hand, to see that no one gets hurt) and ramming a 767 into a skyscraper? When Eugene’s daily newspaper, the Register-Guard, used the word eco-terrorism to describe the investigation, at least one reader took its editors to task, writing that the paper “appears to confuse arson occurring within the context of a nonviolent campaign with terrorism.” The paper opted for the softer-sounding eco-sabotage thereafter …

1) How many roads must a man walk down… before you call him a man?
2) Who will decide who comes to this country… and the circumstances under which they come?
3) If six turned out to be nine… would you mind?
4) If all the hippies cut off all their hair… would you care?
5) The average arson sentence in Oregon in 2001 was just under six years, rapists averaged 10 years and murderers 14 years.

… Jeffrey “Free” Luers is a skinny kid from suburban Los Angeles who is serving his [seventh] year in prison. In 2000, when he was twenty-one, Luers and an accomplice were arrested for setting fire to three SUVs in the middle of the night at a car lot near the University of Oregon (a separate action from those included in the Operation Backfire indictment). A Eugene judge sentenced Luers, who refused all of the government’s plea bargain offers, to nearly twenty-three years in prison. The authorities say they made an example of Luers to forestall further crimes; activists say they made a martyr of him. Luers remains unrepentant. In a recent message to his supporters, he said, “I got careless, I got sloppy. I slipped up. I got caught.” …

[Answers : 1) Dunno. But join John and Ken as they explore whether men and women are really from different planets after all. 2) Hmmm, yes: who decides? 3) TBA. 4) TBA. 5) Smash the state.]

Today is my six year anniversary. I almost didn’t notice to tell you the truth. It isn’t just because one day blends into another in here. Right now I just don’t really care that much that I’m in prison. I know how that sounds but that’s brutally honest. I got careless, I got sloppy. I slipped up. I got caught.

But, over the years something happened. I got stronger. I got louder. I became more powerful than the state ever wanted me to be. You see, I was supposed to be a message to you all out there that would dare resist. But not enough people listened. Some kept fighting back. They kept liberating animals. They kept burning things down.

Now the state wants to send a more powerful message. They sent in agents and infiltrators. They bought off activists and turned others into traitors with threats. The message is simple: the government sees this movement as a threat. And they are telling you that if you challenge them they will try and lock you away for life. It’s a powerful message. It’s down right intimidating, to be honest.

But, this last weekend (June 9-11) another message was sent by 43 cities around the world. That message was very clear: we will not disappear. Yeah, some of us are going to end up in prison. That’s a fact. Some of the weaker individuals might break under that threat. That’s a fact, too. And that is intimidating. Why sugarcoat it?

However, when an international solidarity event, in which 43 cities participate, can be organized from a maximum security prison… That’s not just intimidating. That’s a threat.

There’s no denying the authorities have a lot of power. But so do we and we have to recognize that. We have to harness that energy. Every time we are pushed we must push back twice as hard. Thank you for not being silent. Thank you for standing up for the “green scare” victims, the earth liberation prisoners and for me. I am so grateful, so very grateful I can’t wait to read and hear about all the events. We have shown that we are united, that we can and will support our prisoners.

Now let us show our might. They have heard your words. Make them feel your actions. The earth, the animals, the future, our children, your freedom, the people of Iraq, your very own community needs you to fight back. You are all we have. Your resistance is our only weapon, our only defense. You are the only protection we have left.

PLEASE do EVERYTHING you can to help.

Lesley Stahl on U.S. sanctions against Iraq: We have heard that a half million children have died. I mean, that’s more children than died in Hiroshima. And, you know, is the price worth it?

Secretary of State Madeleine Albright: I think this is a very hard choice, but the price — we think the price is worth it.

I live in Melbourne, Australia. I like anarchy. I don't like nazis. I enjoy eating pizza and drinking beer. I barrack for the greatest football team on Earth: Collingwood Magpies. The 2021 premiership's a cakewalk for the good old Collingwood.
View all posts by @ndy →
This entry was posted in State / Politics, War on Terror. Bookmark the permalink.