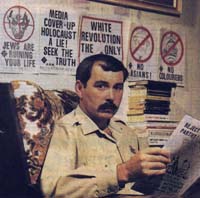 Jack’s back! Yes, Jack van Tongeren, 58, has just a few days ago been released from jail, after having spent the last 17 months on remand in Perth. According to news reports (see below), van Tongeren is in a poor state of health and will spend the next 7 weeks preparing his defence against charges of plotting to commit four arson attacks and 19 counts of criminal damage against four Chinese restaurants in Perth in June and July, 2004 (‘Supremacist leader in court’, The Age, August 7, 2004). “[M]agistrate Robert Black… told the court the arson charges related to four separate alleged attacks, carried out with others, between June 1 and July 16 this year. Mr Black said van Tongeren was accused of plotting to cause criminal damage by fire to properties in the Perth suburbs of Willeton, Karrawarra, Ferndale and another unknown location.”

Former Australian Nationalist Movement leader Jack van Tongeren was granted bail by a Supreme Court judge yesterday ahead of his trial on a charge of plotting to bomb four Chinese restaurants in Perth.

Justice Anthony Templeman ruled that the 58-year-old would have spent an excessive amount of time in custody if he was not granted bail before his three-week trial in March.

“A period of 19 months on remand (assuming a grant of bail was to be refused) would be excessive, having regard to (his) age and the state of his health,” the judge said.

Mr van Tongeren and two co-accused — deputy ANM leader John Anthony Van Blitterswyk, 53, and Matthew Peter Billing, 33 — have denied a charge of conspiring to commit criminal damage by fire. They are accused of plotting to firebomb four Chinese restaurants in June and July 2004 as a publicity stunt to coincide with the release of Mr van Tongeren’s book, The ANM Story.

In his ruling, Justice Templeman said the former Vietnam veteran suffered from post-traumatic stress disorder, irritable bowel syndrome and hearing loss. Also, he had profuse bleeding from burst veins on four occasions. Apart from having a hearing aid fitted, he had no specialist treatment while in custody at Hakea Prison.

“It is clear from the evidence given by (Mr van Tongeren) that he has been worn down — both mentally and physically — by his lengthy incarceration on remand.”

…Bail conditions, including $30,000 personal bail and a $30,000 surety and daily reporting to police, were imposed on Mr van Tongeren.

Interestingly, police claim that ‘Operation Atlantic’ uncovered evidence for the alleged plot after five members of the ‘White Devils’ Social Club for Juvenile Delinquents (aka the Australian Nationalist Movement’s (ANM) youth wing) got busted for vandalism in mid-July 2004: “Detectives involved in Operation Atlantic, the investigation into the graffiti, raided van Tongeren’s house in Gingin, north of Perth, on July 29, where, they allege, they [also?] uncovered a plot to harm WA’s Attorney General Jim McGinty and other high profile community leaders.”

With idiotic mates like the White Dickheads — Damon Paul Blaxall (29), Daniel Tyrone Klavins (26), Frank James Lemin (20), Shannon Mark Post (24), and Ben ‘Getaway Driver’ Weerheym (28) — who needs enemies? Of course, this mob is quite used to frenzied bouts of back-stabbing: metaphorical and literal! Among one of the longer-term tensions within Australian fascism is that between Jim (the ‘Lebanese’) and Jack (the ‘Indonesian’). The November 2002 issue of the AIJAC’s Review features the following piece by Matthew Collins, ‘The Tale of Jack and Jim’:

Van Tongeren was initially a leading light in the Sydney based National Action (NA) neo-Nazi group in the early eighties. As with every almost other member that NA has ever had, Jack quit and went off to form his own organisation, believing NA were being soft on Jews, and not Nazi enough to lead the rebirth of the supreme Aryan being. Despite what followed, some in National Action, those with “radical” beliefs, felt in turn that Van Tongeren had been a little soft on the Asian question. Jack’s parents had previously disowned him, not surprisingly as it turned out, given his Asian ancestry.

Throughout the 1980s, while both National Action and ANM were breaking windows and spraying walls with catchy slogans, both organisations were closely scrutinised and monitored by the authorities. From the top to the very shallow bottom, members were arrested and imprisoned for fire bombings, shootings, even murder, while with their otherwise spare time, they battered and attacked each other.

Jack’s biggest nemesis throughout the eighties, and the ANM continues to bait him today, is James Saleam, former leader and founder of National Action. For constantly and casually reminding everyone of Van Tongeren’s Asian heritage, Saleam is labelled a “Sand Nigger” by the ANM, due to his own, some-say Turkish, some-say Lebanese, background. Certainly the two could not stand further apart in the political wilderness. While Van Tongeren saw a future for Australian neo-Nazism in building a broad-base with the Conservative right, Saleam has continued to waste his political life dreaming of Eureka style insurrection, inspired by Maoist and other obscure revolutionary thinkers. What the two do share, other than their long list of criminal convictions, is an empty and dying grip on the minds of what is left of the traditional Australian fascist movement.

After a number of unsuccessful attempts to establish a foothold in Melbourne during the 1990s — most spectacularly in the form of a ‘shop’ in Fawkner: born January 1997; died April 1998 — National Action has collapsed, and its last fuhrer, the racist (“and that’s official!”) Michael Brander, has opted to follow Jim’s (unsuccessful) journey into academia… best of luck you fascist swine.