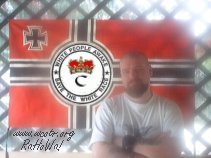 Let’s face it, David Innes‘ mate Colin Campbell is stark, raving… mad. As a cut snake. As a meat axe. Bananas. He’s a broken packet of biscuits, as ugly as a box of blowflies, and he couldn’t organise a root in a brothel. To be honest, I think he’s got the Darling pea and doesn’t know if it’s Pitt street or Christmas. Then again, with an ideology that handles like a dog on lino, it’s no wonder he’s got kangaroos loose in the top paddock. Or to put it another way: the lights are on but nobody’s home (the mystery bag that passes for his brain is empty) and consequently he feels like a pork chop in a synagogue. And despite this bloke not being the full quid / a snag short of a barbie / a couple of tinnies short of a slab, he still claims to be as proud as a rat with a gold tooth! Personally, I think he’s got tickets on himself, and posing in front of a German WWII Navy flag with the swastika ‘cleverly’ replaced by a symbol for his daft ‘church’ only confirms it.

In short: Colin Campbell is a wanker.

Responding to a JJJ journalist’s requests for an interview, Campbell (December 14, 2005) seized the opportunity to inform the world that “We [sic] are well aware of Triple J’s attempts to corrupt White Australian youth with promotion of the drug culture, homosexuality, multiculturalism, and the self hating guilt of being White…. [I have] absolutely no interest in doing any interviews with hacks from jew oriented Triple J.”

Most recently, in response to a number of articles in the Advertiser [Police to examine the law, Authorities investigate Adelaide website, We will survive: racist group] Campbell — or, as Campbell insists his mother addresses him when he’s off playing war-games, the “Reverend Col Campbell 3rd, Komandant WCOTR” — has published a series of rejoinders. In them he coughs and splutters about ‘white guilt’, ‘white pride’, the dangers of ‘miscegenation’ and — yes, you guessed it — more Jewish conspiracies than you can shake a terrorist manual at.

Rather than refute Campbell’s assertions point by point, I’ll summarise his argument: it’s all the Jew’s fault! “The state government and the Adelaide Advertiser, owned by Rupert Murdoch (Fox TV), along with the Jewish Community Council of South Australia, openly colluded in a coordinated libelous attack on the White Crusaders of the RaHoWa! especially and the legally recognised religion of Creativity in general.”

What? You want evidence of this dastardly plot to enslave the White Man? Fortunately, the Colonel has evidence. Mountains of it (and if you ask nicely, the Reverend Patrick “there’s no stopping us” O’Sullivan may even throw in a free set of steak knives!):

1) the Jewish Community Council of South Australia was “involved”. (That is, when asked for comment, JCCSA president Norman Schueler said there was “No room for anti-Semitism in the modern world, let alone virulent anti-Semitism” and “This site is totally beyond the pale and will be totally offensive for Holocaust survivors”).

Read between the lines people!

2) the owner of the Advertiser, Rupert Murdoch, is ‘half-Jewish’.

3) the articles in question were published on January 31. Coincidence? Ha! Only to the un-initiated…

January 30… [is] the day of the Jewish holiday Rosh Chodesh Sh’vat… it was on Rosh Chodesh Sh’vat, in the fortieth year of wandering in the desert, that Moses began to teach and review the Torah. What lesson from the Torah were they trying to teach this year? Perhaps “It is permitted to kill a Jewish denunciator everywhere. It is permitted to kill him even before he denounces.”

The quote from Shulc[h]an Aruch applies to killing Jewish heretics. The following line in this passage [states] that this law does not apply to [the non-Jewish population] and [that] it is forbidden to harm any Gentile… Jewish heretics [were then considered to be] a potential cause of harm and trouble to the Jewish nation. The penalty is designed to demonstrate the severity with which heretical views were considered, rather than [constitute] a practical penalty, as such penalties were rarely imposed…

[Given the actual context of the passage in question] a ‘denunciator’ is one who will cause a fellow Jew [undeserved] harm. [In those times,] if a Jew was caught breaking [even] a trivial law, it would likely cause an atrocity or even [wholesale] massacre…; this is the [real] reason for the prohibition [on] denouncing. [In any case,] this law is not accepted in practice…

There now. Don’t you see? How much more evidence do you need that the Jews are planning World Domination?!? (Unsurprisingly, besides being one of the Judeophobe’s favourite misinterpreted quotes, this passage draws from a much wider range of false and misleading interpretations of Jewish sacred texts. You can read more about such fabrications here and here.)

Finally, in addition to being a rampant Judeophobe, Campbell appears to be suffering from the delusory belief that he lives in the USA; the country from which this foreign ‘religion’ is being imported. Thus, in defence of the WCOTR and its place in Australian society, he first quotes from Ben Klassen, and then rants and raves about ‘our’ Constitutional rights.

Earth to Colonel Campbell: i) Ben Klassen did the right thing and committed suicide in 1993, and his so-called Church has, as widely predicted, split in 57 different directions; ii) this is Australia, boofhead, we have a different Constitution and a different set of laws, and iii) there’s more than one Golden Rule.

Klassen committed suicide in 1993 after the death of his wife, by overdosing on sleeping pills. In his suicide note, he made reference to his book The White Man’s Bible, which describes suicide as “an honorable and dignified way to die for any … of a number of reasons, such as having come to the decision that life is no longer worthwhile.”

I live in Melbourne, Australia. I like anarchy. I don't like nazis. I enjoy eating pizza and drinking beer. I barrack for the greatest football team on Earth: Collingwood Magpies. The 2021 premiership's a cakewalk for the good old Collingwood.
View all posts by @ndy →
This entry was posted in Anti-fascism, History, Media, State / Politics, War on Terror. Bookmark the permalink.