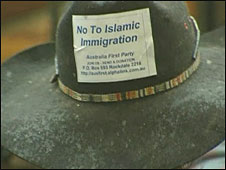 Above : Australia First Party sticker, accompanying BBC report, Australia racism ‘still serious’: “Researchers in Australia have concluded that people are becoming more tolerant of cultural diversity. But racism remains a problem, with one in 10 Australians believing some races are superior to others…”

Well, that’s apparently what a recent survey ‘Challenging Racism: The Anti-Racism Research Project’ concludes. The SMH provides a ‘positive’ spin, selecting a photo of Asma Yusra, “a 21-year-old Muslim from Lakemba who will speak at [a forthcoming] conference”, holding the Australian flag, to accompany the article; the ABC goes for the more straightforward ‘One in 10 Aussies are racist: study’.

“NSW is the most racist state in Australia, a 10-year study has found. Challenging Racism: The Anti-Racism Research Project also found that while Australians were largely welcoming of diversity, the view of national identity was still narrow. The first results of the study will be unveiled at the 4Rs international conference – Rights, Reconciliation, Respect and Responsibility – at the University of Technology, Sydney, which starts on Tuesday. The full results will be released early next year, with the data to be used by human rights and anti-discrimination agencies across Australia to implement strategies specific to the needs of each region. The study, led by human geography and urban studies professor Kevin Dunn, from the University of Western Sydney, found high rates of migration meant NSW, on average, was the least tolerant of all the states and territories…”

“FORTY per cent of Australians believe some ethnic groups do not belong in the country with one in 10 having outwardly racist views, a new study shows…”

The study itself is certain to be more nuanced than a newspaper headline. A few points:

The results as reported are non-specific in terms of allocating particular attitudes to particular ethnic, racial, cultural and national groupings. It also appears that religion — in particular, attitudes towards Islam and Muslims (and to the extent that these may be separated from attitudes towards peoples from the Middle East) — play a large role in shaping overall attitudes. The SMH report states, for example, that “Women were found to be more tolerant than men, with one exception – attitudes towards Muslims”. Further: “Prof Dunn said people also revealed who they singled out the most. ‘The most often-mentioned groups were Muslims or people from the Middle East.’ The overall figures surge to 65 per cent for people over 65 but drop to 31 per cent for those aged 18 to 34.”

That ethnic/racial/cultural/national prejudice is much more common among older citizens than younger is not an unexpected finding, and reflects, it seems, more general attitudes towards ‘difference’. An earlier study — ‘Mapping Homophobia in Australia’, Michael Flood and Clive Hamilton, Australia Institute Webpaper July 2005 (PDF) — concludes that “Older Australians are considerably more homophobic than young adults. However, those in the 14 to 17 age group, especially boys, are much more inclined to hold antigay views than young and middle-aged adults. Homophobic attitudes are closely related to levels of education − 25 per cent of those with tertiary education hold homophobic views compared to 40-50 per cent among those who did not complete high school.”

The survey (again, according to the SMH) “scored highest when people were asked if Australia was weakened by ethnic groups sticking to their old ways and if there were any cultural or ethnic groups that did not fit into Australian society”. Which is an interesting finding — how are ‘old ways’ understood, and by whom? Which “cultural or ethnic groups”, in particular, are considered as unsuitable for Australian society, why, and what distinguishes the ‘cultural’ from the ‘ethnic’ — or are these terms synonymous?

Finally: “On average, about one in 10 people said it was not good for people of different cultures to marry and about the same number said not all races are equal. “It’s only about one in 10 people now in Australia across the different states that would have that sort of view – the racial supremacists for instance,” Prof Dunn said. “That’s still quite high I suppose – there’s a lot of concern that comes out of that”. Yeah… read literally, that means that there’s a political market of around two million or so people in Australia for whom (White) racial supremacy is appealing. Sadly for the supremacists, the major parties, especially the Tories, are well aware of this reservoir, and — leaving aside the brief challenge posed by Pauline Hanson and One Nation — appear reasonably adept at absorbing such sentiment into their programs and policies. Of course, given the diverse constituencies on which they rely for support, this is unlikely to always be the case, and so it’s certainly possible that, probably in response to other, future crises, this sector could be mobilised by other political forces less interested in ‘social harmony’.

42 Responses to Racism in Australia