An AWESOME Obsession (For Suckers)

Charlie and His Orchestra:

“Islamists! They’re comin’ right for us!”

Or so it appears.

On the one hand, in a rather desperate bid to shore up votes for the Republicans in the November Presidential election, some neo-cons calling themselves The Clarion Fund (‘National Security Through Education’) have distributed 28 million copies of a film, Obsession: Radical Islam’s War Against The West, to US citizens in ‘swing’ states. The Republican candidate, John McCain, is running against the Democratic candidate, Barack HUSSEIN Obama.

Obsession was directed, edited, and written by Wayne Kopping and produced by Peter Mier and Raphael Shore. Also on the campaign trail is Daniel Pipes. Well, sorta. Instead of counting sheep in his sleep, he’s been counting Islamists. According to Pipes’ Patented Islamofascist Quantitative Mishmash Calculating Machine, there’s at least 150 million of the buggers out there.

First, though, an explanation of what I meant by Muslims who “support militant Islam”: these are Islamists, individuals who seek a totalistic, worldwide application of Islamic law, the sharia. In particular, they seek to build an Islamic state in Turkey, replace Israel with an Islamic state and the US constitution with the Koran… ambiguous and contradictory percentages lead to no clear, specific count of Islamists. Out of a quantitative mishmash, I suggested just three days after 9/11 that about 10 per cent to 15 per cent of Muslims are determined Islamists. Subsequent evidence generally confirmed that estimate and suggested, if anything, that the actual numbers might be higher…

A Do-It-Yourself Guide to Disarm Fear-Mongering: Muslims are at Peace With You
Fatemah Kashevarz
Counterpunch
September 16, 2008

If you have received a hair-raising “documentary” called Obsession in the mail this weekend, you are not a chosen surprise winner, or the recipient of a kind anonymous gift. You belong to a sought after group of people: the residents of a swing state estimated to be an undecided voter. The film is supposed to convince you that your country is at war with the majority of Muslims who are willing to conquer America, kill or convert you, and establish a fascist empire. If you watch the film by yourself, and have no way of evaluating its content, chances are you will be convinced. Rather, you will be terrified…

A U.S. Muslim advocacy group Tuesday asked the Federal Election Commission to investigate whether a nonprofit group that distributed a controversial DVD about Islam in newspapers nationwide is a “front” for an Israel-based group with a stealth goal of helping Republican presidential candidate John McCain…

If you live in an American swing state you may have received a copy of Obsession in your Sunday paper. ‘Obsession’ isn’t a perfume: it’s a documentary about ‘radical Islam’s war against the West’. In the last two weeks of September, 28 million copies of the film were enclosed as an advertising supplement in 74 newspapers, including the New York Times and the Chronicle of Higher Education. ‘The threat of Radical Islam is the most important issue facing us today,’ the sleeve announces. ‘It’s our responsibility to ensure we can make an informed vote in November.’ The Clarion Fund, the supplement’s sponsor, doesn’t explicitly endorse McCain, so as not to jeopardise its tax-exempt status, but the message is clear enough, and its circulation just happened to coincide with Obama’s leap in the polls.

The Clarion Fund is a front for neoconservative and Israeli pressure groups. It has an office, or at least an address, in Manhattan at Grace Corporate Park Executive Suites, which rents out ‘virtual office identity packages’ for $75 a month. Its website, clarionfund.org, provides neither a list of staff nor a board of directors, and the group still hasn’t disclosed where it gets its money, as required by the IRS. Who paid to make Obsession isn’t clear – it cost $400,000. According to Rabbi Raphael Shore, the film’s Canadian-Israeli producer, 80 per cent of the money came from the executive producer ‘Peter Mier’, but that’s just an alias, as is the name of the film’s production manager, ‘Brett Halperin’. Shore claims ‘Mier’ and ‘Halperin’, whoever they are, are simply taking precautions, though it isn’t clear against what. The danger (whatever it is) hasn’t stopped Shore – or the director, Wayne Kopping, a South African neocon – from going on television to promote their work.

The 60-minute film was first released in 2006 and shown during the mid-term elections on Fox News. Since then it has received top billing at ‘Islamo-Fascism Awareness’ week on American campuses, at Christian-Zionist conferences and at events organised by Republican politicians in Florida. It has found a powerful backer in the real estate magnate Sheldon Adelson, who describes himself as ‘the world’s richest Jew’. The Endowment for Middle East Truth, a neoconservative think tank in Washington DC which recently hosted a series of seminars named after Adelson and his wife, arranged distribution of Obsession, at a cost in the tens of millions.

The makers of the film, like their subjects, are soldiers of God. Almost everyone associated with it or with Clarion has worked for Aish HaTorah, an ‘education’ group with offices in East Jerusalem and strong links to the settler movement. Clarion was incorporated in Delaware to the New York offices of Aish HaTorah and Rabbi Shore was the director, as well as the founder of its media organisation, Honest Reporting, which campaigns against a two-state solution in Israel/Palestine. It’s illegal in the US for nonprofit organisations, or for foreign nationals, to try to influence the outcome of an election.

The film’s chief claim is that 2008 is like 1938, only worse, since there are more Muslims than Germans and they’re more spread out geographically: ‘They’re not outside our borders, they are here.’ Violent raptures and spectacular carnage unfold in slick montages set to throbbing Middle Eastern music: Pakistanis deliriously burning the American flag, Palestinians celebrating the 9/11 attacks, Hizbullah chanting ‘death to America’, clerics praising the ‘magnificent 19’ and the murder of unbelievers, children training to become suicide bombers, the planes crashing into the towers. These images are interspersed with footage of Nazi rallies and Hitler’s speeches. A chapter – narrated by Martin Gilbert, Churchill’s biographer – is devoted to the Mufti’s collaboration with Hitler.

Scary Muslims are everywhere, and the umma stands more united than ever, driven by hatred of infidels and Jews and determined to conquer the West, a civilisation gone soft, weakened by self-doubt, political correctness bordering on treason, and, worst of all, a ‘culture of denial’. Gilbert spells it out:

In the 1930s, the danger of Nazism was there . . . but people thought, well, this is a German problem, it’s a limited problem . . . And I think the same is true today . . . They don’t see that Islamic fundamentalism is a global network and a global problem . . .because if you come to that conclusion – and I’m sure it’s the true conclusion – then you have to do something about it.

Obsession doesn’t say what we should do – except steer well clear of dialogue and negotiation.

Although there are interviews with the usual ‘terrorism experts’ – Daniel Pipes, Alan Dershowitz et al – the film’s portrayal of the region is mostly left to native informants like Nonie Darwish (a leader of Arabs for Israel and the daughter of a slain fighter from Gaza), Brigitte Gabriel (the Lebanese-Christian author of They Must Be Stopped) and Walid Shoebat, a ‘former PLO terrorist’ who operates under a pseudonym – for security reasons, of course. Shoebat runs the Walid Shoebat Foundation, described on its website as an ‘organisation that cries out for the Justice of Israel and the Jewish people’. He’s made a career of recounting his journey from Islamic terror to Christian Zionism before audiences at Evangelical gatherings and the US Air Force Academy. It’s not clear, though, that he ever laid a hand on anyone. According to a relative, ‘the biggest act of terror he ever committed was to glue Palestinian flags on street posts.’ What is very clear is that, for the makers of Obsession, having once hated Jews gives you privileged access to the Muslim mind, and not only if you’re an ex-Muslim. Among the film’s authorities on radical Islam is a former leader of the Hitler Youth, Alfons Heck, who says that ‘what the Muslims do to their own children is even worse’ than the things the Nazis did to young Germans – as only a Nazi could know.

If you didn’t receive Obsession with your paper, you can watch it on YouTube. It’s been posted by a former Muslim whose screen identity is ‘fuckmohammad’.

Adam Shatz is an editor at the London Review.

THIS is the rear view that has been giving Eva Mendes sleepless nights ahead of the premiere of her latest movie. The actress bares her bum in the adaptation of Will Eisner’s 1940s comic book The Spirit. Eva admitted stripping for her role as cat burglar Sand Saref made her nervous. She said: “I’m excited to see what happens with this scene. Well, I don’t think it’s ‘excited’ – I’m actually nervous. I think they have a butt shot of me. I’m not sure how it ended up.” The movie is the story of a rookie cop, played by Gabriel Macht, who returns from the dead as the Spirit to fight crime. Eva was persuaded to reveal her bum cheeks by the film’s director Frank Miller, the man behind Sin City and 300. She said: “I really trusted Frank. We’ll see how that one turns out. The movie looks spectacular. I play a jewel thief who’s been married 15 times and has killed each and every one of her husbands. When do you get to play that?” Eva’s nude scene follows her controversial raunchy ad for Calvin Klein’s Secret Obsession perfume. It featured her rolling around semi-naked in bed and was banned in the US. 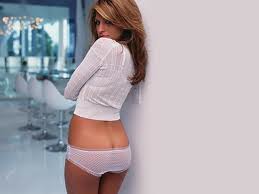 See also : Smearcasting: “documents the public writings and appearances of Islamophobic activists and pundits who intentionally and regularly spread fear, bigotry and misinformation in the media. Offering a fresh look at Islamophobia and its perpetrators in today’s media, it also provides four snapshots, or case studies, describing how Islamophobes manipulate media in order to paint Muslims with a broad, hateful brush.”

I live in Melbourne, Australia. I like anarchy. I don't like nazis. I enjoy eating pizza and drinking beer. I barrack for the greatest football team on Earth: Collingwood Magpies. The 2023 premiership's a cakewalk for the good old Collingwood.
View all posts by @ndy →
This entry was posted in Film, Media, State / Politics, War on Terror. Bookmark the permalink.

2 Responses to An AWESOME Obsession (For Suckers)