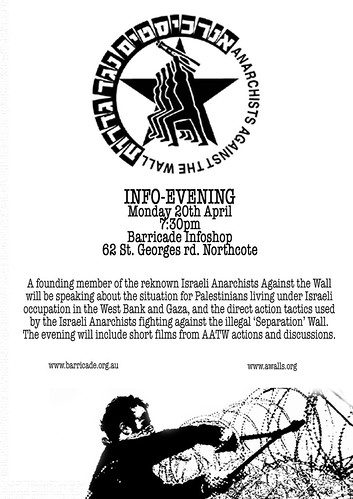 The Israeli Anarchists Against the Wall (AATW) were formed in 2003 and have since used direct action tactics in hundreds of actions in response to the construction of the wall Israel is building on Palestinian land in the Occupied West Bank. AATW work in cooperation with Palestinians in the West Bank in actions to remove Israeli road-blocks and to destroy the 700km + wall that separates them.

A founding member of the AATW will be speaking at Barricade Infoshop on Monday the 20th of April about the history of the movement, the direct action tactics employed, and the State repression waged against activists involved, as well as the situation for the Palestinian population living under the shadow of the wall. The evening will include short films from actions and discussions.

PS. The February issue (#35) of Mutiny contains three articles of relevance: ‘Palestinian Solidarity In Australia’ by Rawan Abdul; ‘The Struggle For Freedom Needs To Break With The Illusions of National Liberation & Argue For A No State Solution’ by Dave; and ‘No State For You!: Some Limits Of Radical & Anarchist Analysis Of The Attack On Gaza’ by Liz Thompson & Benjamin Rosenzweig [PDF].

I live in Melbourne, Australia. I like anarchy. I don't like nazis. I enjoy eating pizza and drinking beer. I barrack for the greatest football team on Earth: Collingwood Magpies. The 2023 premiership's a cakewalk for the good old Collingwood.
View all posts by @ndy →
This entry was posted in Anarchism. Bookmark the permalink.

1 Response to Israeli Anarchists Against the Wall : Monday, April 20