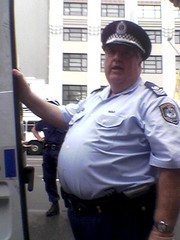 The Sydney Forum, Australia’s largest annual gathering of fascists, was held on the weekend of September 18/19. On Sunday, some d00d went to Tempe to protest. His account is below.

Note that, as well as being “the Australian headquarters for hate politics” and the offices of the Australia First Party, 725 Princes Highway, Tempe is the site of a notorious murder. In April 1991 — while Saleam was behind bars for organising a shotgun assault upon the home of ANC representative Eddie Funde — members of Dr James Saleam’s previous political party, National Action, killed one another: “Bovver, twenty-five years old and already weighing 108 kilos thanks to the three or four stubbies of beer he’d consume for breakfast each morning, was shot eight times with a sawn-off .22 rifle by Perry Whitehouse, ten years his senior but less than half his size, during a drunken, confused and basically pointless argument. When Whitehouse blew him away, Bovver was wearing a singlet bearing the message: Say No To The New Gun Control Laws.”

For very self-evident reasons, organisers of Australia’s premier white-power gathering, the so-called ‘Sydney Forum’, go to great lengths to hide information about where and when their next illustrious event will be held. In the past, the assembled cream of Australia’s fascist crop have been met with large, vocal counter-rallies by antifascist activists and community groups who insist that it is simply ludicrous that a city as diverse, multicultural and tolerant as Sydney is in any way the appropriate venue for a rally of the wannabe Blackshirts. Whilst I would vigorously agree, this isn’t really one of those stories about the clash of opposing ideologies you might expect the day after the Sydney Forum. Rather this is an account of those who, wielding the threat of arrest, enable the unchallenged spread of racist propaganda and the perpetuation of xenophobia, homophobia, fabricated history and all the other regressive, hateful vile you’d expect to find at a party full of nazis.

Whilst the zeitgeist has changed rather a lot since Oswald Mosley relied on London police to “protect” the march of his British Union of Fascists down Cable Street in 1936, the parasitic relationship between fascist groups and the police has survived pretty much intact. The strategy is different, largely because it is infuriatingly hard to club a protester you don’t want to listen to in public now that we live in the age of social media and smartphone ubiquity, but the effect is the same. I should make it abundantly clear that whilst I don’t believe that the cops sympathised particularly with the assembled dignitaries of white-supremacism, it is largely irrelevant to the outcome of their hard-line ‘no criticism’ show of force – to immunise fascist ideology from ANY criticism, providing the desired separation from empirical reality fascism needs to perpetuate itself without resorting to violent means.

When I turned up to this year’s Sydney Forum with the intention of challenging the bonehead vacuum, you could say that the police conducted themselves in a manner that any private security firm would pride itself on. I didn’t even have time to make it to the opposite side of the street where I intended on standing before I was challenged, told to stop, detained and grilled whilst the assembled boneheads leered at me from the gate of their compound. Go efficiency!

At first I was told by the officer in charge that ‘my friend’ (I was alone) had just pointed a weapon at police, that he had already had to bury a colleague that week, and he was damned if he was going to let that happen under his watch. I did not see what this other kid did, so I refuse to speculate as to what might have happened, but even though it should have been abundantly clear to anybody that I was there by myself it still took a long time for the officers to concede the point. In the meantime, struggling to understand what any of his accusations had to do in any way with me (and wondering why the keynote address of a prominent international fascist propagandist and Holocaust denier deserved tax-payer funded private security) my bag was confiscated and I was searched. I was also forced to relinquish my driver’s license, under threat of arrest, and my details were recorded.

The tension was palpable. I hoisted my best impersonation of level-headedness and attempted not to splutter indignantly as the officer in charge delivered an admirably theatrical soliloquy decrying my ‘obvious’ desire to start a violent riot that would terrify the elderly residents of the street. I also learnt that I hated freedom of speech and that I was a hypocrite for not just letting the guys ‘have a barbecue’ in peace. When the curtains finally dropped, I attempted to clarify my intent (peaceful); my motives (plug refugee rights events to other activists, attempt to finally use my degree in History by rebuffing the anti-Semitic revisionist drivel); and that my solution to obvious nonsense free-speech I vehemently disagree with is opposition from my own informed, dissenting speech.

Greeted by blank stares and the seemingly reluctant report by a constable that the search of my bag yielded little more than Refugee Action Coalition fliers, water, a book, gum & cigarettes (as well as my primary ‘weapon’, a sign reading ‘welcome refugees, not fascists’), the officer in charge lost interest and left the constable to ‘process’ me. Apparently the decision had already been made, because at this point I was issued an official move along notice and told to return to my specific suburb of origin under the threat of arrest. Out of options and with thirty seconds to get going before they charged me with disobeying police instructions, I stumbled away perplexed and fuming by the absurdity of it all.

As I walked, indignant at the notion I was the biggest threat to public security in an area full of people whose idea of a good time is getting drunk and beating the shit out of anyone they regard as untermensch, a carload of men in Blood and Honour (neo-Nazi) garb pulled up alongside (perhaps mistaking short hair for fascist sympathy), to enquire about how I was on this particular day. Twenty odd seconds into my thirty and surprisingly I didn’t feel like hanging around to analyse the events of the last few minutes with them that much. Though it was clearly an exercise in stating what could not be more obvious, I assured them they were in no absolutely no danger from my sinister bleeding-heart protestations and that I was already on my way. Gesturing towards the police cars in way of explanation I added, ‘you know which side they’re on.’

I live in Melbourne, Australia. I like anarchy. I don't like nazis. I enjoy eating pizza and drinking beer. I barrack for the greatest football team on Earth: Collingwood Magpies. The 2023 premiership's a cakewalk for the good old Collingwood.
View all posts by @ndy →
This entry was posted in Anti-fascism and tagged 2010 Sydney Forum. Bookmark the permalink.