2010 Sydney Forum : Praise the Lord and pass the ammunition

Somewhere in Sydney, of all places.

The Forum brings together the dregs of the local fascist movement: members of the Australia First Party/Eureka Youth League, Blood & Honour, New Right/‘national anarchists’, One Nation Party, Volksfront, and various other racist kooks belonging to other, even tinier fascist groupuscules, or operating as independent loons.

The event takes place in two separate venues, neither of which are publicly identified as such — presumably in order to avoid The Bear Jew making trouble for the assembled patriots. In previous years, the second day’s events have taken place at AF Party headquarters in Tempe. Otherwise, last year’s Forum was kindly made possible by the Returned Services League branch @ Petersham; in 2008, there was no Forum, while in 2007, Eastwood RSL were the proud hosts. In 2006, Estonian House provided a temporary home to the fascists, while in 2005 the Russian Social Club said nyet to the neo-Nazis. In 2004 it was Bexley RSL’s opportunity to Throw The Jew Down The Well of Australian history.

And so on and so forth.

Last year’s Forum was a triumph, apparently, not least because, according to Dr James Saleam, as a result of a small group of protesters attending the first day’s proceedings: “One significant ‘plus’ out of this nuisance was that a key libeller and inciter of violence against patriotic people, Andy Moran, a Melbourne-based leftist, was identified and photographed for the first time…”

Of course, in reality, I was safely tucked away in a black helicopter many miles above the Forum, where I shall be again this year, and from which vantage point I shall once again be employing highly-sophisticated, Israeli technology to eavesdrop upon the inner-most thoughts of those careless enough not to attend the Forum without the appropriate headgear.

The speakers whose thoughts I will be monitoring from on high include Canadian Holocaust denialist Paul Fromm, John McGrath (seemingly a former candidate for Australians Against Further Immigration in 2007 and the Progressive Conservative Party in 1980) and Rob McIntyre, a man dedicated to Better Living Resources. (According to its website, “Better Living Resources proudly supports Eagle House – a vision for the transformation for women and their children”. Eagle House is in turn a project of ‘GHS Ministries’ and the ‘Hope Foundation’.) McIntyre addressed the Inverell Forum in 2006–2009, in 2007 along with MC Welf Herfurth. Other speakers are Rob Halford — who apparently embodies the Voice of Reason but not, disappointingly, that of Judas Priest — and of course Dr James Saleam.

Brendon O’Connell and Peter Spencer have cancelled their appearances.

One of the d00ds what came to Newtown last month to spread agitprop on behalf of the APP has been revealed as a member of the Australian Navy. Presumably, Joel Buckley looks forward to being posted up north, where he can show those “DIRTY, CAMEL FUCKING, RAG HEADED PIECES OF SHIT” that we will decide who comes to this country and the circumstances in which they come. 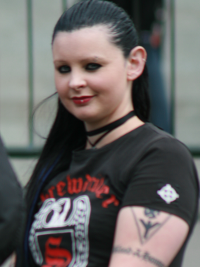 Over the pond, Upper Hutt mother Lisa Marie Thompson has been exposed as a liar, as well as having bad taste in both license plates and politics. Thus:

A woman who claims that her personalised licence plate “ARYAN1” is the initial and surname of a former boyfriend has links to white supremacist groups and is backed by the National Front.

Upper Hutt mother Lisa Marie Thompson – who has references to neo-Nazi white-power organisation Blood & Honour on a personal webpage – has denied being racist.

She said she had no idea what “Aryan” meant and the apparent nod to Adolf Hitler’s “master” race actually referred to her former boyfriend – Andrew Ryan.

However, Ms Thompson, 32 – whose licence plate sparked a complaint to roading authorities – has links to white supremacist groups which appear active in Wellington.

The Facebook page of the body piercer, seamstress and mother of three includes “friends” posing before swastika flags and claiming allegiance to “white nationalist” skinhead groups such as Crew 38 and Hammerskin Nation…

I tells ya, this mob couldn’t lie straight in bed.

I live in Melbourne, Australia. I like anarchy. I don't like nazis. I enjoy eating pizza and drinking beer. I barrack for the greatest football team on Earth: Collingwood Magpies. The 2021 premiership's a cakewalk for the good old Collingwood.
View all posts by @ndy →
This entry was posted in Anti-fascism and tagged 2010 Sydney Forum, Joel Buckley. Bookmark the permalink.

2 Responses to 2010 Sydney Forum : Praise the Lord and pass the ammunition