God Hears Pleas of the Innocent 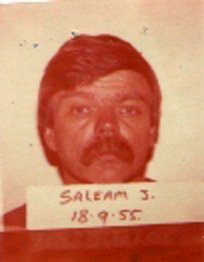 Jew-hating Doctor Jim Saleam is innocent!* Or so he reckons. He also reckons to have been battling to have his conviction for his role in a shotgun attack upon ANC representative Eddie Funde in 1989 overturned on the basis of an alleged conspiracy by the state to silence him and his then party, National Action. On Stormfront, the world’s leading site for white, racist, Jew-hating crackpots, Jim announces:

I seek from anyone who posts on this board, or who may view this board, two different items of information. Each is relevant to an application to the NSW Supreme Court (Crimes Act, Section 474) to gain an inquiry into two inter-related convictions won corruptly against me by ASIO / NSW Police Special Branch in 1991:

a. Is there anyone who was associated with, or knows someone who was linked to, the “Crystal Street Skinheads” (ie. Crystal Street, Petersham, in Sydney) in 1988 – 1989?

If so, you may be able to provide in some way, useful information concerning events around a Crown Witness in my trial, Mr. Michael George White.

I advise generally, that despite intimidation from Special Branch to accuse me of involvement in his crime, Mr. White reversed parts of this accusation and altered his testimony continually in court – obviously to obtain my acquittal with white-lie-perjury. Of course, he was unsuccessful. I currently have in my possession a signed confession from Mr. White exonerating me of the offences. I post that document here.

b. I am trying to locate two persons from the former Adelaide National Action who attended the home of Jason Roderick Frost in the Ryde area of Sydney, in March 1989. Whilst there, you would have been shown by Mr. Frost, a (legal) pump action shotgun.

One other person who was with you at the time has provided a Statutory Declaration concerning seeing this gun.

Mr. Frost denied in evidence ever owning or possessing such a gun.

It was Mr. Frost who nominated his actual co-offender in the matter (Mr. White), did a deal with Special Branch to avoid imprisonment if he would also nominate me and another man in his crime and who persisted with his perjury to the end.

Material on the case generally, under the title “Pardon Me: The Anatomy Of An Australian Political Trial”, can be found at:

The site “J Saleam” refers “Readers” (why am I reminded of ‘Raffles the Gentleman Thug’?)** of white supremacist dribble to, and the material on his case, proceeds in pretty much the same direction as the above. Thus over nine years ago, Herr Doktor — ‘Pardon Me’ — wrote:

This is the first time an Australian has argued on the Internet that criminal convictions won against him, were the fruits of corruption. It is, at the time this document was placed upon the Internet, exactly 10 years since the original crime was committed. The author has served four years prison (May 14 1991 – May 4 1995).

I have no doubt that this case would make an excellent book. It has everything:

Spies, the kidnapping of a defence witness by secret operatives done to the movie script of Mississippi Burning, the mis-use of an informant whose code-name and purpose were analogous to the script of Betrayed, secret Australian Security Intelligence Organisation tape-recordings of the Defence’s trial preparations, the murder of my co-accused recorded as it actually took place courtesy of the same surveillance operation, a drunken, corrupt police officer discredited at the Royal Commission Into The New South Wales Police Service (1994-97) whose obsession to convict the accused created the parameters of the case, fabricated notebooks, wildly contradictory prosecution witnesses, some prosecution evidence which seemed to be re-run of the script in the Ananda Marga and the Hilton Bomb frame-ups, political pressure to win a conviction, a prosecution witness with an effective-indemnity for perjury, a Court Of Criminal Appeal ruling which said that I convicted myself at the Trial by leading certain evidence, facts which just don’t fit – and the crime victim, the Representative to Australia of the African National Congress.

I hope I have your attention.

Certainly. But pardon me if I quibble with Jim’s relentless, fourteen year long struggle for justice: Section 474 of the NSW Crimes Act (1900) has been repealed. Seven years ago. In which case, perhaps Herr Doktor would be better served pursuing legal redress via the Crimes (Appeal and Review) Act 2001? And under the provisions of Section 78?

(2) The registrar of the Criminal Division of the Supreme Court must cause a copy of any application made under this section to be given to the Minister.

Dunno. Maybe I’m wrong. Like Jim, I ain’t no lawyer. But the issuing of such a statement regarding events and personalities dating back over twenty years is more than a little odd. Perhaps Jim is merely preparing for his bid for a seat on the local council later this year (September 13)?

Oddly, a ‘Michael George White’ stood as a BNP candidate in Thurrock in 2006.

Insofar as Stormfront has a policy, or platform, that platform consists of three major planks:

First, we share a racialist vision for the general prosperity, security, and betterment of our people.

From that commitment flows our most important message: we name the Jew as the deadliest, if not the only, threat to our existence as a race. Forge this message in titanium…

** ‘Raffles, Gentleman Thug’ is a comic strip featured in adult comic Viz featuring a nineteenth-century nobleman given to ‘immense erudition and wanton violence’. The basic premise is a nod towards/ripoff of E. W. Hornung’s ‘Raffles the Thief’ character, the main difference being that this Raffles is very much a 21st century hooligan (despite his use of Victorian language). The strip parodies British yob culture, placing modern day situations in a Victorian/Edwardian setting, including considerable anachronisms, and Raffles himself uses antiquated or formal words in very informal or modern situations.

Finally, an excerpt from Leviathan by John Birmingham about a bunch of violent nutters in the ’80s, aka National Action, including a deserving case who comes to a sticky end:

I live in Melbourne, Australia. I like anarchy. I don't like nazis. I enjoy eating pizza and drinking beer. I barrack for the greatest football team on Earth: Collingwood Magpies. The 2023 premiership's a cakewalk for the good old Collingwood.
View all posts by @ndy →
This entry was posted in !nataS, Anti-fascism, State / Politics. Bookmark the permalink.