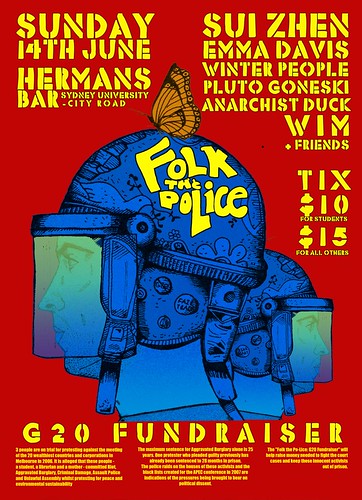 Over June and July, 2009, three people will finally go to trial for their role in the G20 protests in Melbourne in November, 2006. These people — Sina Brown-Davis, Tim Davis Frank, and Sunil Menon — are facing charges ranging from ‘Riot’ to ‘Unlawful Assembly’, with ‘Aggravated Burglary’ and ‘Assault Police’ playing the role of Malcolm in the Middle. Note that ‘Aggravated Burglary’ is an unusually serious charge — the maximum sentence for which is 25 years gaol — & arises from brief occupations of a Defence Force recruitment centre and the offices of Tenix, a military contractor; occupations which involved nothing more serious than the use of red glitter & water pistols. (Akin Sari remains in jail serving a 28 month sentence. Other accused pleaded guilty to reduced charges & received fines &/or compensation orders &/or suspended sentences &/or bonds.)

On the day of rest – Sunday the 14th of June – there will be a fundraiser to help pay for the legal defence of these people & keep them out of gaol. All proceeds from this gig will go to the G20 Defence Fund.

PLEASE PASS THIS INFORMATION ON AND HELP KEEP GOOD PEOPLE OUT OF BAD PLACES!

…While the main focus of [the “war on terror”] has been fear-mongering about Muslims, Howard, Iemma, the cops and the media were not going to miss the opportunity to try to equate demonstrations with terrorism, in order to intimidate people out of protesting.

In this they were assisted by the actions of a small number – the so-called “Arterial Bloc” – at the demonstration against the G20 leaders in Melbourne last November. In a totally elitist fashion, these people decided to throw themselves at the police lines without reference to the thousands of demonstrators who had come to the rally.

It is not accidental that the NSW police constantly referred to these events as the “justification” for their massive militarised presence at the APEC protest, nor that it was G20 footage of small groups of masked idiots in white chemical suits that the media ran to “prove” the protest at APEC was going to be violent… ~ Diane Fieldes, The lessons of the anti-APEC protests, Socialist Alternative, No. 121, October 2008

On some occasions antiquated or infrequently used laws are pressed into service or old laws are used in new ways. At least 200 people were arrested at AIDEX 1991 (an international defence equipment exhibition supported by the Australian government) on the unusual basis of ‘an ancient common law procedure which enables [police] to arrest a person when they have a reasonable apprehension that a breach of the peace is imminent’… The ‘Austudy 5’ were charged with rescue and unlawful assembly after a 1992 demonstration about Austudy in Melbourne on the basis of their presence at the rally rather than acts they were alleged to have committed…

The potential for new law to be created and novel applications of existing law to be found is not limited to public protest. However, the extensive catalogue of potentially applicable offences and the range of circumstances in which they may be applied suggest that the unregulated space available for public protest is limited. The supposedly stable border between lawful and unlawful protest also emerges as a fiction.

If this is the case, it also raises a paradox centred on the relationship between dissent and the community. If dissent is defined as both essential to community but also criminal conduct, and community is defined partly by the exclusion of criminal conduct, then dissenters find themselves encouraged on the one hand and yet excluded on the other. ~ Mary Heath, ‘Policing and Self-Policing in the Shadow of the Law: Negotiating Space for Public Dissent’, Criminal Justice in Diverse Communities, a special issue (Vol.17, No.1) of the journal Law in Context, Federation Press, 2000

The anarchist crazies involved in the ultra-violence were in no serious sense part of the demo. Just like their black bloc mates in Europe they simply exploited the demo for their own purposes… The left should offer no comfort to these crazies. We should do whatever we can to isolate them. They are wreckers. If they grow in Australia it will simply make it harder to build future protests and movements. ~ Mick Armstrong, Socialist Alternative / Austudy 5), November 19, 2006

In March 1992, a protest was held in Melbourne regarding a Government proposal to cut Austudy. Supposedly, 22 police officers were injured during the subsequent ‘riot’, two of whom required hospitalisation. “Professional protesters” were blamed for the “ultraviolence” which resulted both in these injuries and, more significantly, in the fact that police were forced to release from custody (the back of a divvy van) four individuals they’d arrested during the course of their (and hundred of others’) successful efforts to break through a police line in front of Parliament House.

…The officer in charge of the operation, Inspector Doug Hocking, described the brawl as the worst violence he had experienced in 22 years.

Last night two police constables were in St Vincent’s Hospital — one with broken ribs and the other with severe bruising to his groin — and 20 other officers had been treated for minor injuries.

One mounted policeman was pulled from his horse and attacked with pipes and poles. His horse bolted down Lonsdale Street before being stopped.
Bottles and sticks were thrown.
The four students who were arrested were put in a police van but as the van drove off, students overtook it and blocked its path at the corner of Lonsdale and Spring streets.
Protesters scribbled graffiti on the side of the van and vandalised some of its electrical fittings…

Students grabbed metal barricades from nearby construction sites and put up a barricade. The mounted police were jabbed with the three-metre long bars and thrashed with placrads and other objects. bottles and cans were also thrown…

“The deputy chief police commissioner, Mr John Frame, has started criminal investigations into what he called a “small core of anarchists” responsible for violence during a student protest outside Parliament last Thursday…” (Gerard Ryle, Anarchists blamed for uni protest, The Age, March 30, 1992)

It is time to expose the International Socialists for what they are: anarchists out to disrupt public order by manipulating people with genuine grievances. This week these parasitical wreckers were at it again, this time outside Victoria’s Parliament House.

They hijacked a rally of students protesting against a proposal to replace the Austudy allowance with a loan scheme. The students had every right to join their colleagues across Australia to put forward their point of view. But the International Socialists turned the rally into a riot in which 22 police were hurt and the Premier had her office window broken.

The same old faces were there at the barricades. The same ones prominent during the Bush visit, the Hoechst dispute, the AIDEX turmoil in Canberra and, closer to home, the violence that erupted during an industrial dispute at the office from which this newspaper is published.

The police will lay charges over Thursday’s events if they can. But this is not enough. The International Socialists organisation is, by definition, imported. The immigration authorities should find out whether any of its members who are not Australian born are, through their actions, in breach of the permits under which they remain here. If so, let’s send them home. They are not welcome!

Exactly the same statements were trotted out then as are being trotted out now, only whereas in 1992 it was senior police claiming that this was “the worst violence… seen in Melbourne for 20 years”, now it’s Mick Armstrong. And whereas now Akin Sari has been sent down for 28 months (and dozens of others still face charges), then it was Mick himself who was up on charges, along with four of his comrades: Jeff Sparrow, Jill Sparrow, Marcus Banks and Johnathan Sherlock. And finally, whereas then ‘the left’ was expected to rally ’round Mick and the other members of the ISO, now…

I live in Melbourne, Australia. I like anarchy. I don't like nazis. I enjoy eating pizza and drinking beer. I barrack for the greatest football team on Earth: Collingwood Magpies. The 2023 premiership's a cakewalk for the good old Collingwood.
View all posts by @ndy →
This entry was posted in Broken Windows, Music, State / Politics and tagged G20. Bookmark the permalink.