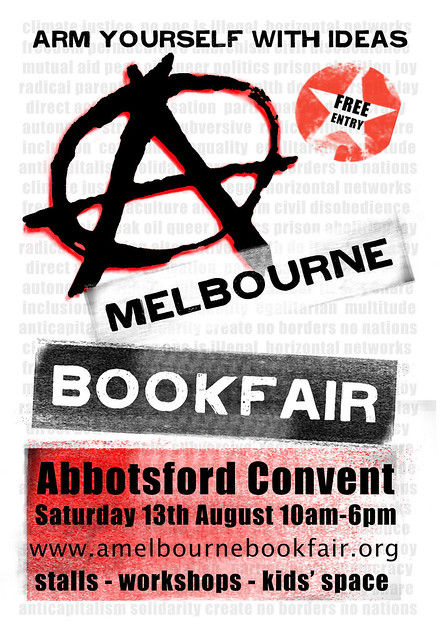 About the Anarchist Melbourne Bookfair

The Anarchist Melbourne Bookfair will be a free event held at Abbotsford Convent from 10am-6pm on Saturday 13th August, 2011. The bookfair will consist of up to 68 stalls of independent book-sellers and activist groups. Alongside the stalls there will be about 24 one-hour workshops running all day on all kinds of anarchist and direct action topics. There will also be a small kids’ space if carers want to self-organise child minding or the kids just want to play indoors.

I live in Melbourne, Australia. I like anarchy. I don't like nazis. I enjoy eating pizza and drinking beer. I barrack for the greatest football team on Earth: Collingwood Magpies. The 2023 premiership's a cakewalk for the good old Collingwood.
View all posts by @ndy →
This entry was posted in Anarchism, Collingwood and tagged Anarchist Melbourne Bookfair, Melbourne Anarchist Bookfair. Bookmark the permalink.