The same bourgeois media that was just a few weeks ago talking about stalemate, and questioning whether it was time to make another deal with Gadaffi, has now been re-mobilised by the ruling class to declare that this is now the ‘endgame’, and that Gadaffi and his family are not even in Tripoli any more, but are either in Sirte or in the south, where they can make their getaway to Chad, Zimbabwe or even Venezuela.

The reality is that the NATO powers are back to where they were a number of months ago, when Foreign Secretary Hague made a complete fool of himself when he revealed on the TV his absolute certainty that Gadaffi was on his way to Venezuela.

They are not talking about successfully storming the two million people of Tripoli, but creating the conditions, with the deadline being September 1, for Gadaffi to be either six feet under, or on his way out of the country.

We can therefore expect pressure to be applied on the Libyan leadership – in the form of massive NATO air attacks on Tripoli, along with mass killings and NATO atrocities of all kinds to try and encourage this process.

The opposite is also the case.

It is that the Libyan masses, as they stand fast with Gadaffi at their head, are near to breaking the brittle power of the NATO air forces, and their even more brittle governments, which are all under fire at home from their own people, who oppose the austerity measures that are being forced on them to rescue the banks and pay the bill for the Libyan military adventure of the oil thieves.

As Gadaffi and the Libyan masses stand fast and refuse to be broken, the workers in the UK and the other NATO states must take to the streets against the war. Then NATO and its plans to grab Libya and re-grab the African continent will be defeated.

As a matter of fact since the start of the war the stakes involved have become much bigger.

It is not just a question of NATO being able to plunder Libya’s oil. There is also the strategic necessity of NATO having major bases in north Africa to take action against the Tunisian and Algerian workers and also against the Egyptian workers who are already moving against NATO’s chief ally in the Middle East, Israel.

As well, without seizing Libya and its oil, the plans of the EU to recolonise Africa and re-seize its gigantic mineral and other resources will founder.

The Libyan masses, when they fight the NATO terror machine and its local accomplices, are fighting the battle for every African worker, and also for the working class of the UK and France, whose ruling classes are determined to make the workers of their own countries pay the full bill for the economic catastrophe.

We repeat, the Libyan people must not fight alone.

African workers from South Africa to Egypt and Algeria must take action to force the NATO brigands to stop their war.

Workers in the UK and France must realise that if their bosses put the handcuffs back on the Libyan people, they are next. They will treat the workers in exactly the same way that Cameron is already treating the youth – that is to beat, beat and beat them again.

The TUC Congress is meeting from Monday 12 September. It must demand that NATO quits Libya and must call regional and national demonstrations throughout September and the autumn in support of the Libyan people, for the defeat of the NATO brigands, and for the bringing down of the Cameron government! 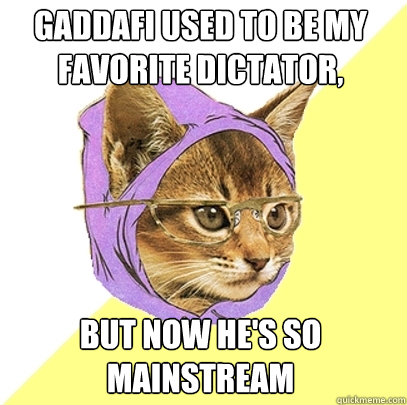 I live in Melbourne, Australia. I like anarchy. I don't like nazis. I enjoy eating pizza and drinking beer. I barrack for the greatest football team on Earth: Collingwood Magpies. The 2020 premiership's a cakewalk for the good old Collingwood.
View all posts by @ndy →
This entry was posted in !nataS, State / Politics, That's Capitalism!, War on Terror and tagged Libya, Workers Revolutionary Party. Bookmark the permalink.

12 Responses to VICTORY TO GADAFFI – DEFEAT THE NATO GANGSTERS!