Little Creatures is a brand of beer owned by Lion, a “leading beverage and food company with a portfolio that includes many of Australia and New Zealand’s favourite brands”. The company’s slogan is ‘growing sociability and well-being in our world’.

Sadly, the corporation‘s commitment to or desire to be thought of as being nice and friendly isn’t really being helped by its involvement in the re-fitting of a factory in Geelong (cnr Fyan’s Road and Swanston Street). According to locals, the company is less-than committed to ensuring working conditions at the site are healthy, and their means of communicating with locals in response to their concerns has been by way of locking the gates to the factory, locking out union reps and hiring private goons to police the site. In addition, the Perth-based TFG Group (which has been sub-contracted to undertake the refit) wants to appoint their own H&S reps — apparently in contravention of Victorian law.

As a result of these shenanigans, local community members have been boycotting the company and protesting in front of the factory gates since Monday (October 22). This morning a community BBQ was held. In a further demonstration of the company’s commitment to sociability, one of those who attended the BBQ was slapped with a $2,000 on-the-spot fine by the sheriff’s men for allegedly parking their car in the wrogn spot.

The campaign is of course continuing. 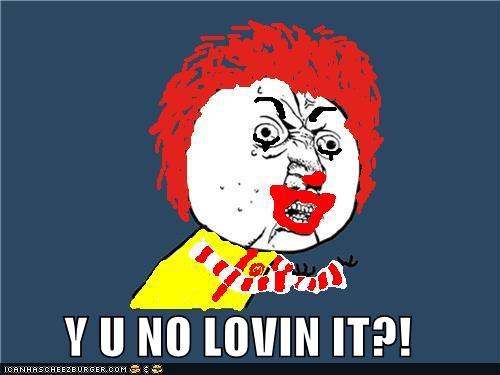 The clownish fast-food chain has spread its tentacles just about everywhere, and nothing and (almost) nobody seems to be able to stop it. It’s latest target, Tecoma, is located in the Dandenongs. Amazingly, despite widespread local opposition, the corporation’s newest link has — shock! horror! — been given the rubber stamp by VCAT (October 10) and the local council has refused (October 24) to undertake an appeal in the Supreme Court.

Despite VCAT’s rubber stamp and the council’s unwillingness to fight, locals are still committed to ensuring Tecoma remains free from the grip of the evil clown. Given that they’re struggling against the corporate-state nexus, it’s highly likely that in the end the only one who’ll be smiling is Ronald, but mad props for trying.

I live in Melbourne, Australia. I like anarchy. I don't like nazis. I enjoy eating pizza and drinking beer. I barrack for the greatest football team on Earth: Collingwood Magpies. The 2021 premiership's a cakewalk for the good old Collingwood.
View all posts by @ndy →
This entry was posted in Broken Windows, Media, State / Politics, That's Capitalism! and tagged Grubby Creatures, Little Creatures, McDonald's. Bookmark the permalink.