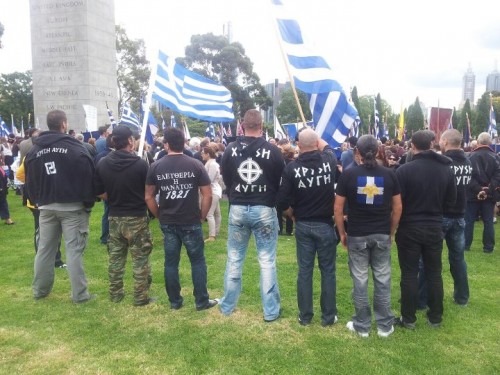 After what may have proven to be a false dawn back in early 2012, members of the Greek fascist party Χρυσή Αυγή/Chrysi Avyi/Chrysi Avgi or ‘Golden Dawn’ (GD) have again announced their intention to open an office in Melbourne, Australia, ‘sister city’ to Thessaloniki and sometimes described as the third largest ‘Greek city’ in the world. The party’s announcement was made by a GD spokesperson on local Greek radio station 3XY, and was accompanied by a promise that leading members of the party would travel to Melbourne for the occasion.

For obvious reasons, GD has limited appeal in Melbourne, but the establishment of an office or any other kind of public presence would be harmful, both to the anti-fascist movement in Greece and locally. Thus while it may have limited impact here, a public presence in Melbourne would allow the party to recruit locals, to provide a firmer foundation for the party’s international efforts, to channel funds to its home base and, possibly, help supplement the para-military infrastructure the party is building in collaboration with Greek police (and elements of the armed forces).

Currently, the only Australian support for GD has come from the radical right fringe (the Australia First Party and the neo-Nazi milieu — online forums such as Stormfront and tiny groupuscules such as Nationalist Alternative). Further, unlike Wilders and his Islamophobia, given its commitment to neo-fascist/neo-Nazi politics, it’s highly unlikely any more mainstream figure will be attracted to GD’s program. (Note that a handful of neo-Nazis did attend Wilders’ speech in Melbourne — more on that later.)

In any case, in response to the announcement, a petition is circulating calling on the Australian Government not to allow GD MPs to enter the country. Regardless of its success, GD is sure to meet with opposition should it go public. The last time a fascist organisation opened an office in Melbourne was in 1997. On that occasion it took 18 months for the project to collapse, the result of both external pressure and in-fighting. Elsewhere, GD have attempted to set up shop in New York and Chicago (and, er, Montreal) — with seemingly little success. Will the fascists fail in Melbourne?

Further reading:
Greece’s neo-fascists are on the rise… and now they’re going into schools: How Golden Dawn is nurturing the next generation, Nathalie Savaricas, The Independent, February 2, 2012: “In a special investigation, Nathalie Savaricas reveals the tactics used to recruit children to its far-right political beliefs”. Fears in Germany as Golden Dawn moves in from Greece, Kate Connolly in Berlin and Helena Smith in Athens, The Guardian, February 5, 2013: “Greek neo-Nazi party believed to be in Nuremberg with aim of recruiting young Greeks flocking to Germany in search of work”.

On the other side of the equation:
The Future of Greece: A Society of Barbarism or of Social Spaces for Freedom, The New Significance, February 13, 2013.

Ongoing coverage:
From the Greek Streets | I Can’t Relax in Greece.

I live in Melbourne, Australia. I like anarchy. I don't like nazis. I enjoy eating pizza and drinking beer. I barrack for the greatest football team on Earth: Collingwood Magpies. The 2023 premiership's a cakewalk for the good old Collingwood.
View all posts by @ndy →
This entry was posted in Anti-fascism, Broken Windows, State / Politics and tagged Chrysi Avyi, Golden Dawn, Χρυσή Αυγή. Bookmark the permalink.