The campaign against fluoridation of the Geelong water supply has apparently gone batshit, with a report in today’s edition of The Age indicating that a death threat has been delivered to Victorian Labor minister Lisa Neville.

Curiously, Scott the ‘national anarchist’ (sic) has thrown his puny weight behind the campaign, attending a rally against fluoridation on June 13, and remarking that: “Overall, the rally was a success and the fight goes on. The BAFF group and its supporters have made clear that the date fluoridation commences is not the end of the campaign, it is the date the fight rams [sic] up a level and goes on stronger than ever before! We will be there till the end, for our freedom to choose and the health of our future generations.”

This article [mathaba.net/news/?x=620688] was published on the nutty mathaba site — see : mathaba.net : last words, May 1, 2008 — the publishers of which, in collaboration with local nutzis belonging to the New Right/’national anarchists’ — attempted to bring down my blog last year.

Scott’s most recent foray into the world of student politics was sponsored by Donna Yan and Bonita Silva of Vertigo, the student zine of the University of Technology Sydney. See : National Anarchism (Again) (May 30, 2009) and A is for Anarchy. B is for Bullshit. (May 24, 2009).

Obviously, Scott is a man of many hats. 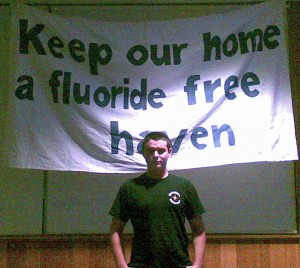 Some people never ever learn.

Anti-fluoride extremists have threatened to kill a Victorian government minister and blow up a regional water authority.

As anger over fluoridating Geelong’s water supply mounted today, Labor minister Lisa Neville has been targeted along with water and health officials.

A death threat was left with a bottle of water on the verandah of Ms Neville’s house on Saturday night, a government spokeswoman said.

Anti-fluoride activists have also threatened to blow up Barwon Water’s treatment plants as the authority begins on Monday adding fluoride to the water supply in Geelong, 70 kilometres southwest of Melbourne.

The Department of Human Services (DHS) received a threatening letter in the mail last week.

All three threats are being investigated by police.

A government spokeswoman said Ms Neville, who is the member for Bellarine, returned home on Saturday night to find the bottle of water and a note on her front verandah.

Note that, according to Rick Wallace of The Australian, ‘The note read: “Thanks for the poison bitch – ready to kill you slowly”.’ (MP delivered death threat over fluoride in water debate, June 22, 2009).

I live in Melbourne, Australia. I like anarchy. I don't like nazis. I enjoy eating pizza and drinking beer. I barrack for the greatest football team on Earth: Collingwood Magpies. The 2023 premiership's a cakewalk for the good old Collingwood.
View all posts by @ndy →
This entry was posted in !nataS, Death and tagged fluoridation, Geelong, national anarchism. Bookmark the permalink.