The Great Aussie Patriot is A Big Fat Silly 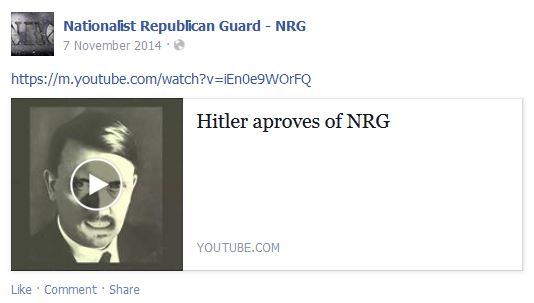 For the last few weeks The Great Aussie Patriot (aka Shermon Burgess) has been co-producing propaganda videos with a small group of neo-Nazis calling themselves ‘Nationalist Republican Guard’. Never one to miss an opportunity to wrap himself and his neo-Nazi collaborators in the Australian flag, Burgess recently appealed to his 11,000+ followers on Facebook for images of their dead, soldiering ancestors to be used as grist in his anti-Muslim propaganda mill.

Or perhaps public embarrassment is simply the price you pay for hopping into bed with convicted anti-Semites?

If you have the stomach for their neo-Nazi nonsense, you can watch NRG’s video here.

I live in Melbourne, Australia. I like anarchy. I don't like nazis. I enjoy eating pizza and drinking beer. I barrack for the greatest football team on Earth: Collingwood Magpies. The 2021 premiership's a cakewalk for the good old Collingwood.
View all posts by @ndy →
This entry was posted in !nataS, Anti-fascism, History, Media, State / Politics and tagged Nationalist Republican Guard, Neil Luke Erikson, Shermon Burgess, The Great Aussie Patriot. Bookmark the permalink.