In a development that is sure to enrage law-abiding, tax-paying, and property rights-respecting citizens everywhere…

The ramshackle house that the married Labour MPs known as ‘Mr and Mrs Expenses’ claim as their ‘main’ home has been taken over by squatters.

Alan and Ann Keen say the derelict semi-detached house in Brentford, West London, is their primary residence and have claimed £140,000 in four years for a second home ten miles away in Westminster.

But now ten squatters have taken up residence in the Brook Road South property, which has boarded-up windows, weeds choking the front steps and a beer-can strewn garden… 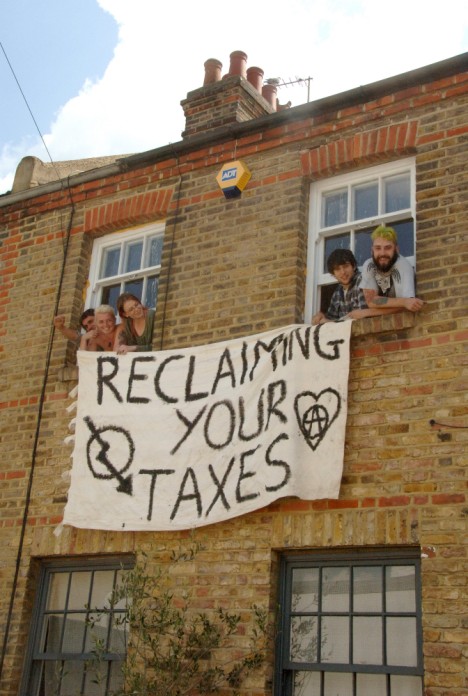 Eco-terrorists take advantage of down surge in working-class struggle.

Ultra-violent anarchist crazies definitely best left isolated are also stirring up trouble across the water in Calais, where they have joined swarms of illegal non-citizens in a manic attempt to kill, crush, and destroy Western Civilization by way of forming a temporary community centred on a ‘NoBorders’ camp. A leaked intelligence report has revealed that local authorities are especially worried about the presence of several dozen Kiwi anarchists, whose previous efforts at causing chaos have struck fear into the hearts of both police and Marxist revolutionaries alike.

I live in Melbourne, Australia. I like anarchy. I don't like nazis. I enjoy eating pizza and drinking beer. I barrack for the greatest football team on Earth: Collingwood Magpies. The 2023 premiership's a cakewalk for the good old Collingwood.
View all posts by @ndy →
This entry was posted in Broken Windows, State / Politics and tagged squatting. Bookmark the permalink.

1 Response to Squatters Are Scum #666