Barrie, the One Nation of today is a very different beast to what it was 20 years ago. They are a lot more sophisticated, they have clearly resonated with a lot of people.
~ Senator Arthur Sinodinos, Insiders (ABC), February 12, 2017

With the WA state election less than a month away, the Tories are shitting bricks over the prospect of hemorrhaging votes to Pauline Hanson’s One Nation Party, and have stitched up a deal to preference Our Pauline above their coalition partners in the Nationals. (See : Liberal Party to direct preferences to One Nation above Nationals in WA, Matthew Doran and Chris Uhlmann, ABC, February 13, 2017.) Two ONP candidates, Dane Sorensen (North West Central) and David Miller (Collie Preston), have made some squawking noises in protest at the deal — they apparently didn’t get the memo that Our Pauline runs the show — and it’s a reversal of previous Tory policy, but it comes with John HoWARd’s blessing, so s’all good.

As for Sindonis’ allegation of sophistication, it’s laughable, but presumably intended to make (liberal) Tories feel less bad about supporting openly racist, homophobic and xenophobic candidates. And as Stewart Lee has observed, ‘if political correctness has achieved one thing, it’s to make the Conservative Party cloak its inherent racism behind more creative language’.

• One Nation candidates push anti-gay messages and Port Arthur conspiracy theory, Joshua Robertson, The Guardian, January 13, 2017
Tracey Bell-Henselin was the Rise Up Australia Party candidate for the federal seat of Fisher at the 2016 federal election. She received 2,210 votes (2.64%).

• One Nation candidate Peter Rogers dumped over blog, warns of revolt against Pauline Hanson, Francis Tapim, ABC, January 28, 2017
This One Nation Candidate Suggested The 9/11 Terror Attacks Were Faked, Alice Workman, Buzzfeed, February 2, 2017
Peter Rogers was the ONP candidate for the federal seat of Leichhardt, Queensland in 2016, where he received 6,775 votes (7.63%).
John Cox stood for the Mature Australia Party in Wright at the 2016 federal election, gaining 902 votes (1.0%). 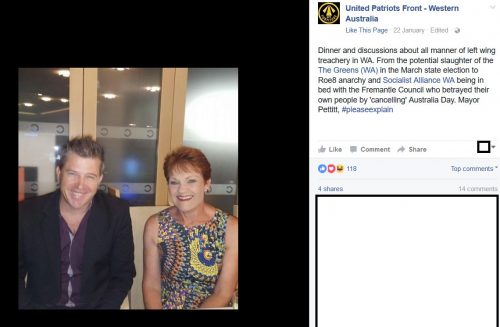 The 2017 Western Australian state election is scheduled for Saturday, March 11, 2017.

Polling indicates the Turnbull government’s fortunes have slipped since the election, and the Senate success of One Nation has seen the party re-emerge as a real player for the WA state election. For several decades there has been a clear trend for federal governments to damage their state brethren’s election prospects, and the Barnett government will be contemplating the role played by Federal politics in the [defeat] of state conservative governments in Victoria in 2014 and Queensland in 2015.

• Here’s WA’s Federal election candidate who received just 37 votes, Phoebe Wearne, The West Australian, July 14, 2016
A big swing towards maverick Queenslander Bob Katter has failed to translate into electoral success in WA, where his party’s candidate battled to win even 40 votes. The wooden spoon for the least votes won in WA at this month’s Federal poll is expected to go to the sole WA Senate candidate for Katter’s Australian Party, Susan Hoddinott, who attracted 37 of a possible 1.5 million votes to date.

• One Nation: a party that knows how to pick ‘em, Gary Adshead, Natalie Richards and Daniel Emerson, The West Australian, January 22, 2017
Christian Pastor Lawrence Shave, ONP candidate for Dawesville, digs chicks in bikinis: What might have taken One Nation by surprise was a recruitment advertisement the pastor placed on a backpacker website in 2015. “Now hiring bikini baristas in Perth,” it read. “Wanted for a coffee/tea drive-through shop establishment. Uniform is a one or two-piece bathing suit and shorts. Must be 18 years or older! No exceptions!”

• Dumped One Nation candidate plans to send ice addicts to ‘uninhabited island’, Catherine Healey, Yahoo7 News, January 24, 2017
Brian Brightman was dumped by ONP as the party’s candidate for Joondalup not because of his ice plan but on account of the fact that he ‘confessed to a 23-year-old conviction for [the] theft of $1100 worth of departure tax stamps when he was a customs officer at Perth Airport’.

• WA election 2017: Pilbara One Nation candidate says taxpayers should not fund ‘lazy’ single mums, Joseph Dunstan, ABC, January 31, 2017
David Archibald has authored dozens of articles for neo-con zine Quadrant, all along the lines you’d expect (climate change denialism, racism, advocacy of genocide, etc.). At the 2016 federal election he was the Australian Liberty Alliance candidate in Curtin, where he received 1,544 votes (1.8%).

• One Nation candidate is a South African model and TV presenter who wants a ‘separate state for white people’, Stephen Johnson, The Daily Mail, February 6, 2017
Rozane Bezuidenhout migrated to Australia from South Africa in 2008.

• One Nation candidate linked gay marriage to polygamy, Kylar Loussikian, The Australian, February 14, 2017
Ross Slater writes (August 31, 2016) : Legalising same sex marriage will open the door to compulsory homosexual teachings in homes, schools and churches, thereby confusing children, students and congregation because heterosexuality will not be recognised as normal. Eventually legalising polygamy, multitudinous marriages, sibling marriage and reducing the age of consent will follow because identical, naïve arguments used for legalising same sex marriage will be used for legalising the others.

• One Nation candidate says gay activists are using ‘Nazi mind control’, Michaela Morgan, SBS, February 15, 2017
Michelle Meyers is a … brilliant candidate with lots of well thought-out, practical, ideas. She is ensuring the financial security of this country for years to come.

1 Response to Arthur Sinodinos & The Sophisticated One Nation Party