Well, if it’s good enough for The Age and 4 Corners…

In May/June 2001, it was discovered, independently of the collective, that a member of the Barricade collective was, in fact, a spy.

Subsequent investigations suggested that the person in question — Mehmet Akif Ersoy [1] (employing the pseudonym ‘Mehmet Osman’) — was a former government agent. Mehmet, having previously worked for/with ASIS, the DIO, the Federal Justice Office and the Victoria Police, was, in 2000/2001, attempting to establish himself as a freelance informant for the state/corporate sector under the guise of a business consultancy, Universal Axiom.

Universal Axiom was an Australian company (ACN 091 146 155) that registered with the Australian Securities & Investments Commission (ASIC) on 11/01/2000. According to the company extract, the Registered Office for the company was Walters & Partners, located in Box Hill, Victoria. Further, Mehmet’s date of birth was given as being 27/04/1967 and his place of birth Istanbul, Turkey. If correct, this would mean that Mehmet is now 39.

Mehmet, it was discovered, was working ‘undercover’ and in the employ of a number of corporations (in particular, those in the mining and timber industries) seeking to obtain otherwise ‘confidential’ information on individuals and groups in the environmental movement. These corporations included:

General Atomics [2] — a nuclear physics and defense contractor headquartered in San Diego, California, and the parent company of Heathgate Resources, owners and managers of the Beverley uranium mine; and

North Ltd — since taken over by Rio Tinto, owners and managers of the Jabiluka uranium mine and also heavy investors in the woodchipping industry.

Of particular concern to Mehmet were the campaigns then being conducted against uranium mining, whether in the Northern Territory (Jabiluka) or South Australia (Beverley). As I see it, his membership of the Barricade collective fulfilled two functions: one, it enabled him to maintain a watching brief on the activities of local anarchists (numbers of which naturally involve themselves in environmental struggles); two, it enabled him to establish a ‘profile’ with which to approach various other political/social communities.

On this second point he was most insistent: literally demanding that the collective vouch for his credibility in order to facilitate his attempts, not only to simply join campaigning groups, but also — and as is standard practice — to be entrusted with the very important role of liasing with others. (For example, in the Beverley campaign, Mehmet attempted to be entrusted with liasing between Aboriginal and environmental activists.)

As 4 Corners has confirmed, the environmental movement was, and remains, a big worry for big business. Certainly worry enough to support the construction of an ‘A Team’, and to employ Mehmet — and who knows how many others? — to lie, cheat and steal from social movements, groups and individuals. All for the benefit of a very small group of people with more money than ways to flaunt it.

Perhaps we should take comfort in the fact that state and corporate authorities should feel so threatened by our attempts to stop their ‘progress’ — a ‘progress’ which strips us of our humanity at the same time as it plunders our communities and our Earth — to resort to such measures. For we have a new world in our hearts, one based on freedom, equality and solidarity, and no amount of lies and deceit can prevent this world from continuing to grow — both now, and in our future. 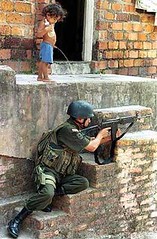 [1] Also, a likely pseudonym: Mehmet Akif Ersoy (1873 – 1936) was a Turkish poet. Ersoy wrote the national anthem of Turkey, Istiklâl Marsi (The March of Independence in English), adopted by the Turkish state in 1921.

Mehmet is approximately 5′ 7″ or 8″ tall, balding, of solid build and olive complexion (Mehmet claimed to be of both Kurdish and Turkish ancestry, at different times, and as required). He was involved in a number of different groups and campaigns, including but not limited to Barricade, Friends of the Earth and the Jabiluka Action Group.

More on Mehmet, his methods, and his motivations, later.

…One of the largest corporate sponsors of lawmakers’ travel was General Atomics, a relatively small San Diego-based defense contractor that makes the Predator, an unmanned spy plane now in wide use by the United States and other countries. The study reported that the company “largely targeted congressional staff members, spending roughly $660,000 on 86 trips for legislators, aides and their spouses from 2000 to mid-2005.” Some of the trips were valued at more than $25,000.

On trips paid for by General Atomics to Turkey and Australia, congressional staffers attended meetings with foreign government officials that the company was soliciting to buy the Predator.

“[It’s] useful and very helpful, in fact, when you go down and talk to the government officials, to have congressional people go along and discuss the capabilities of [the plane] with them,” Tom Cassidy, chief executive of General Atomics Aeronautical Systems, the company’s aircraft-manufacturing subsidiary, told the center.

I live in Melbourne, Australia. I like anarchy. I don't like nazis. I enjoy eating pizza and drinking beer. I barrack for the greatest football team on Earth: Collingwood Magpies. The 2023 premiership's a cakewalk for the good old Collingwood.
View all posts by @ndy →
This entry was posted in !nataS, Anarchism, State / Politics, Television. Bookmark the permalink.

2 Responses to Revealed: spying on Anarchists