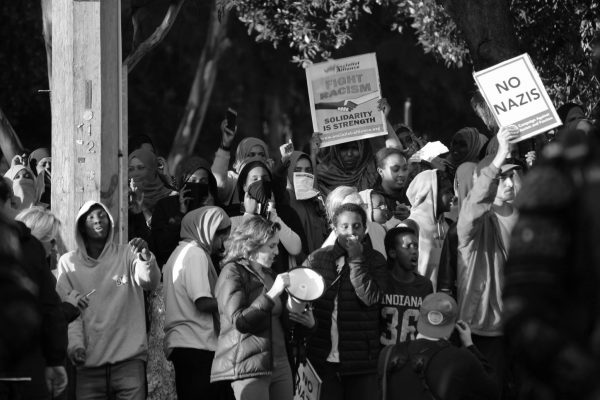 As previously noted, a number of people have been charged with various offences arising from the Milo Yiannopoulos counter-protest outside Melbourne Pavilion in the Melbourne suburb of Kensington in December last year. While tour organisers and venue owners (Damien Costas/Penthouse and Melbourne Pavilion/B.A. Glen Investments) can continue to enjoy the phat profits generated by having the hate merchant perform LIVE! ON-STAGE!, the local community at Flemington estate are not so fortunate: at least three young African-Australian residents are facing charges for protesting the fascist intrusion. As a result, a legal fund has been established by Solidarity & Defence in order to assist these residents:

For hours after the Milo Yiannopoulos event on December 4 last year, police protected a group of fascists yelling racial abuse at the mainly black and Muslim residents at the estate. Residents responded by joining in protests against the far-right event occurring across the road from their home.

Serious concerns exist about police conduct on the night. Police attacked protesters, before going on a rampage through the Flemington flats, chasing young people, trying to force their way into homes and attacking residents indiscriminately with batons and pepper spray late into the night. This police aggression has been widely reported and was investigated formally. It comes on the back of years of racial profiling by police in the Flemington area.

Two of these young people now face charges for participating in the protest. The third was charged for an incident a few days after the protest — he went [to] Flemington police station to complain about police conduct on the night, was stopped outside the police station, and subsequently arrested with Police alleging an assault took place.

…:::PLEASE DONATE TO THE FUND IF YOU ARE ABLE AND SHARE THE APPEAL AMONG YOUR NETWORKS:::…