G20: Bolt, the big girl’s blouse, at his brilliant best 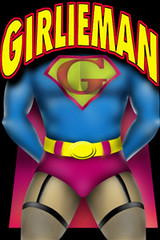 Pardon me for asking, but are these the police you say will help protect us against gangsters and terrorists?

Thanks, Christine Nixon, for giving us the feminised police force you’d always promised.

See it now at work in these pictures from the anti-capitalist riot in Melbourne on Saturday.

See, Chief Commissioner, how even the tiniest woman in a tutu can now wrestle a baton from one of your well-armoured officers.

That’s success in your gender war! After all, you couldn’t get better proof that your force has gone girlie.

But pardon me for asking: are these the police you say will help protect us against gangsters and terrorists?

Let’s first go through more pictures from the protest outside the G20 meeting of world finance ministers.

Hey, there’s tutu woman again, this time monstering your riot police with her new baton, without a single officer daring to arrest her.

And here’s one of your police standing meekly in a line, not defending themselves or their dignity, while some hooligan on the roof gives them a long, humiliating drenching with a hose.

See how few risk lifting a baton with striking intent, even when being spat on, bitten, hit with rubbish bins, pelted with garbage and rammed with plastic barriers? I’ve seen punching bags with more fight…

I live in Melbourne, Australia. I like anarchy. I don't like nazis. I enjoy eating pizza and drinking beer. I barrack for the greatest football team on Earth: Collingwood Magpies. The 2023 premiership's a cakewalk for the good old Collingwood.
View all posts by @ndy →
This entry was posted in !nataS, Media, Sex & Sexuality, State / Politics. Bookmark the permalink.