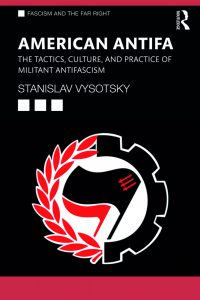 On this week’s episode of Yeah Nah, we talk to Stanislav Vysotsky [Twitter]. Stas is the author of American Antifa: The Tactics, Culture, and Practice of Militant Antifascism (Routledge, 2020):

Since the election of President Trump and the rise in racist and white supremacist activity, the militant antifascist movement known as antifa has become increasingly active and high profile in the United States. This book analyzes the tactics, culture, and practices of the movement through a combination of social movement studies and critical criminological perspectives.

Based on extensive fieldwork and interviews with activists, this book is the first scholarly sociological analysis of contemporary antifascist activism in the United States. Drawing on social movement studies, subculture studies and critical criminology, it explains antifa’s membership, their ideology, strategy, tactics and use of culture as a weapon against the far right. It provides the most detailed account of this movement and also cuts through much of the mythology and common misunderstandings about it.

This book will be of interest to scholars and students in sociology, political science, anthropology, criminology, and history; however, a general audience would also be interested in the explanation of what drives antifa tactics and strategy in light of the high-profile conflicts between fascists and antifascists.

You can read moar stuff by Stas here and he wrote about What – or who – is antifa? for The Conversation in June last year.

• Please note that the podcast version of this episode contains a longer disko with Stas.
• You can listen to the podcast on Apple, Spotify and other platforms.
• We also have a Facebook page for the show, which you’re invited to ‘Like’ and to ‘Follow’.
• I have a Patreon account which youse are also invited to support.

I live in Melbourne, Australia. I like anarchy. I don't like nazis. I enjoy eating pizza and drinking beer. I barrack for the greatest football team on Earth: Collingwood Magpies. The 2021 premiership's a cakewalk for the good old Collingwood.
View all posts by @ndy →
This entry was posted in Anarchism, Anti-fascism, History, Media, Music, State / Politics, That's Capitalism!, War on Terror and tagged 3CR, American Antifa: The Tactics Culture and Practice of Militant Antifascism, antifa, Stanislav Vysotsky, Yeah Nah Pasaran. Bookmark the permalink.