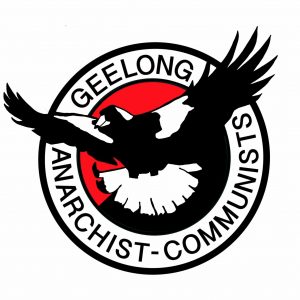 OMGWTF Geelong Anarchist-Communists are on Facebook: And when the ball is bounced, to the final bell / Stand up and fight like hell! They join All for one, and one for all / We will answer to the call Anarchist Communists Meanjin [Facebook], the It’s a grand old flag, it’s a high-flying flag / It’s the emblem for me and for you Melbourne Anarchist-Communist Group (who gotta blog and a zine called The Anvil) and the Lift that noble banner high Sydney Anarcho-Communists, who gotta mention on Red & Black Notes, a Facebook page, a Twitter, a reading group and contribute to a monthly zine called Mutiny! published by Black Flag Sydney (not to be confused with the earlier zine).

I live in Melbourne, Australia. I like anarchy. I don't like nazis. I enjoy eating pizza and drinking beer. I barrack for the greatest football team on Earth: Collingwood Magpies. The 2021 premiership's a cakewalk for the good old Collingwood.
View all posts by @ndy →
This entry was posted in Anarchism, State / Politics, That's Capitalism! and tagged Anarchist Communists Meanjin, Black Flag Sydney, Geelong Anarchist-Communists, Melbourne Anarchist Communist Group, Red & Black Notes, Sydney Anarcho-Communists. Bookmark the permalink.

2 Responses to Anarchist-communism? In this economy?