Moda Kitchen and Bar, located at 140 Victoria Street in Seddon, is a family owned modern Italian restaurant with an emphasis on seasonal, locally sourced produce, an international wine list, a welcoming atmosphere — and plenty of space for plague rats, apparently. 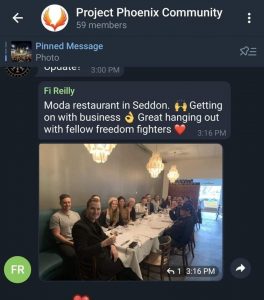 A popular Seddon restaurant is under investigation over claims it hosted an illegal feast for the ringleaders of a fiery anti-lockdown protest.

More than a dozen anti-vaxxers, including protest inciters Monica Smit and Morgan Jonas, were photographed at Moda Kitchen and Bar in Seddon on Saturday afternoon despite statewide coronavirus restrictions which have shut restaurant doors and banned public gatherings.

The photograph, posted on encrypted communication app Telegram, was deleted on Sunday as the restaurant faced huge public backlash and threats of customer boycotts.

A Department of Justice and Community Safety spokeswoman said the incident will be investigated by the government’s coronavirus enforcement team.

“This claim has been referred to the Victorian Government’s High-Risk Industry Engagement and Enforcement Operation for investigation – and it will take action as necessary,” the spokeswoman said.

Moda Kitchen and Bar denied opening its doors to the anti-vax group, despite police confirming they were called to the Victoria St restaurant over reports of “a group not wearing masks” about 4.30pm on Saturday.

“We were closed. We went there to clean but we were closed. I don’t know what people are talking about,” the restaurant owner told the Herald Sun.

The photo, posted to Telegram at 3.16pm on Saturday, shows 15 people celebrating with wine inside the restaurant with the caption: “Moda restaurant in Seddon. Getting on with business. Great hanging out with fellow freedom fighters”.

The same anti-vaxxer wrote: Loved having lunch with everyone afterward in Seddon. We were just finishing lunch when the business got a call the police were on the way. People who dob on business is such a low act in my mind. Let’s all continue to support these types of businesses.

Police responding to reports of a maskless gathering found no one inside the venue when they arrived at 4.30pm.

Businesses which breach coronavirus restrictions face a fine of $9913.

Ms Smit and Mr Jonas run Reignite Democracy Australia, which has been involved in several anti-lockdown rallies held in Melbourne since the pandemic began.

On Saturday 14 protesters were arrested for offences including assaulting police, affray and breaching the chief health officer’s directions following the Flagstaff Gardens rally.

A total of 55 penalty notices were issued.

I live in Melbourne, Australia. I like anarchy. I don't like nazis. I enjoy eating pizza and drinking beer. I barrack for the greatest football team on Earth: Collingwood Magpies. The 2021 premiership's a cakewalk for the good old Collingwood.
View all posts by @ndy →
This entry was posted in !nataS, Death, Media, State / Politics, That's Capitalism! and tagged COVID-19, Melbourne, Moda Kitchen and Bar, Monica Smit, Morgan Jonas, Reignite Democracy Australia, Seddon. Bookmark the permalink.