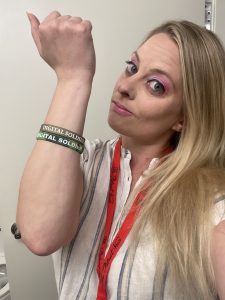 On this week’s episode of Yeah Nah Pasaran! on 3CR we talk to Amanda Moore [Twitter]. Amanda spent many months undercover among the MAGA mob and the QAnon milieu so you don’t have to.

See also : The Plan Was Simple: Infiltrate MAGA World and Tell Everyone What She Saw. Then She Was Found Out., Ali Breland, Mother Jones, February 2, 2022 | I Was At The Capitol On Jan 6. This Is What I Saw., Amanda Moore, Logically, January 7, 2022 | She Went Undercover in MAGA for a Year—What She Found Was ‘Alarming’, The Daily Beast, January 5, 2022 | MAGA fan girl was actually an undercover researcher—and she’s ready to spill the far-right’s secrets, Mikael Thalen, The Daily Dot, October 25, 2021.

I live in Melbourne, Australia. I like anarchy. I don't like nazis. I enjoy eating pizza and drinking beer. I barrack for the greatest football team on Earth: Collingwood Magpies. The 2023 premiership's a cakewalk for the good old Collingwood.
View all posts by @ndy →
This entry was posted in Anti-fascism, Media, State / Politics, War on Terror and tagged 3CR, Amanda Moore, MAGA, QAnon, Yeah Nah Pasaran. Bookmark the permalink.