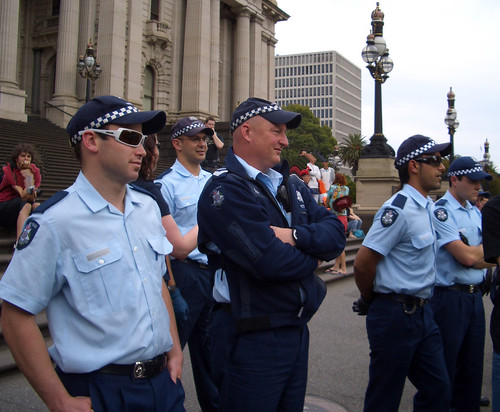 Above : Police outside Parliament House, November 18, 2006. As has become standard practice at public protests since S11 (2000), none wear ID so as to better avoid identification by the public. A nominal requirement of Victoria Police Operating Instructions — members “Must wear Force issue nametags with their first name or initial(s), surname and rank displayed on their right chest at all times” — it is, with the knowledge and consent of their superiors, routinely and systematically ignored by police members. The reason for this is not obscure: to make it extremely difficult for members of the public to pursue civil litigation against them

Rosalie Delaney and Dominic Richardson have been charged with riot, affray and various other charges relating to the G20 demonstrations.

Delaney is a 19-year-old woman from Parkville who was also charged with criminal damage.

Richardson is a 24-year-old man from Brunswick who is also charged with conduct endangering person.

The pair were questioned by detectives from Taskforce Salver which was set up to try and identify the protesters who attacked police and damaged a police brawler van.

The taskforce of 20 detectives have used photos and media footage to help trace the demonstrators involved in the November 18 violence near the Grand Hyatt.

More than 10 police were injured, including one who suffered a broken wrist and others who were treated for bite wounds.

An officer who suffered bite wounds faces a three-month wait to learn if he has contracted hepatitis or HIV.

Today’s Herald Sun contains a similar report, but importantly assumes guilt on the part of those arrested, as does Murdoch’s other franchise, Sky News Australia.