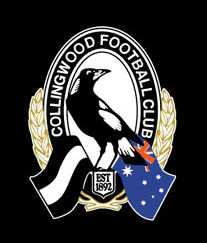 COLLINGWOOD Football Club has a tradition of performance that is unparallelled in league history.

The Magpies were the youngest of the clubs that formed the Victorian Football League in 1897, but have made a huge impact on the competition and the game in general.

For the best part of the history of League football, Collingwood has been the most consistently performed of all clubs, having appeared in 72 final series out of a possible 103 to the end of 1999. That is 10 instances more than the next best side – arch rival Carlton…

Collingwood made it back to back flags in 1903 and along the way played a pioneering game in Sydney [!] for premiership points against arch rival Fitzroy. The Magpies lost that game, but won the most important match of the year, the Grand Final, by a nerve-tingling two points.

It was in this year that a young man named Jock McHale first turned out for the club. He was to have a profound influence firstly as a player then as a coach, over the next 50 years…

…in 1910 [Collingwood] added another flag to their collection when they won a fiery Grand Final against Carlton which began with Magpie follower Les Hughes being poleaxed before the first bounce.

During this era Collingwood produced the first great full-forward of League football. “Dick” Lee was a high flying spearhead with an innate goal-sense. He topped the VFL goalkicking for four consecutive seasons from 1906 and in all would head the list on 10 occasions in a stunning career…

The end of Lee’s career overlapped the emergence of a new star in front of goals – the bulky Gordon Coventry who was the antithesis of Lee in style and build, but had an appetite for goals that mirrored his predecessor’s.

Collingwood missed two finals series in a row as the side rebuilt in 1923 and 1924. The temporary step backwards, however would herald an era of sustained domination, the like of which had never been seen in VFL football…

COVENTRY and his brother Syd were lynchpins of the side and others such as Harry and Albert Collier, Jack Beveridge and Charlie Dibbs developed into players of the highest calibre.

Grand Final losses in 1925 and 1926 were merely the platform to a stunning run.

The result was more clearcut a year later when the Magpies rolled the same opponent by 33 points.

Ruckman Syd Coventry led from the front and his Brownlow Medal in 1927 had been a fitting accolade for such a magnificent footballer.

There would be more Brownlow success in 1929 when Albert Collier took out the honor. His brother Harry tied for the 1930 Brownlow only to lose it on a countback. Harry Collier received a retrospective medal in 1989.

Individual honors were all very well, but the team and The Club were everything at Collingwood. “The Machine” was at its peak in 1929 when it hummed through 18 home and away games without a defeat.

Overconfidence in the semi-final led to a 10 goal upset at the hands of Richmond, but the Magpies quickly regrouped and McHale produced a tactical masterstroke for the Grand Final when he used star full-forward Gordon Coventry as a decoy and focussed the attacks on “Tubby” Edmonds. The result was Collingwood’s third flag on the trot.

Ironically McHale was laid up in bed with severe influenza on the day Collingwood took a record fourth flag in a row on Grand Final day 1930 [a record which still stands].

In 1936 it was again a case of the same Grand Final combatants facing up to each other and once more Collingwood proved victorious. It was the Magpies’ 11th flag and confirmed the club’s dominance of the VFL competition that was then just 39 years old. At the time Fitzroy was the next most successful club with seven flags followed by Essendon with six [in the unlikely event anyone cares]…

Coventry, universally known as “Nuts”, hung up his boots at the end of 1937 and drew the curtain on a career that had produced 1299 goals from 306 games. It was a record for any League player and would stand until 1999 when it was passed by Tony [“You’d have marked it if it was a bag of donuts”] Lockett…

…Losing many players to the services, Collingwood slipped during the years of World War II, but on the resumption of normal competition ran third in 1945.

Within two years Kyne had the team in a Grand Final in which it succumbed to Geelong, but in 1953 the Magpies gave the hint of things to come by rolling Geelong in the second semi-final.

On Grand Final day, with Lou Richards as skipper, the Magpies held off a late Geelong charge to win by 12 points. Richards and his brother Ron were the third generation of a Magpie dynasty that had started with their grandfather Charlie Pannam.

From the mid-1950s Melbourne emerged as the power side of League football and the clashes between Collingwood and the Demons became highlights of the League fixture.

In 1955 and 1956 Melbourne rolled over Collingwood in Grand Finals and by the time the two sides faced each other in the 1958 Grand Final the Demons were looking for their fourth successive flag and the chance to equal Colingwood’s proud record established from 1927-30.

The Demons were red-hot favorites and skipped away to a three-goal lead at quarter-time. But Magpie skipper Murray Weideman and dour ruckman Barry Harrison applied physical pressure which had Melbourne players concentrating on revenge rather than football. With the Demons distracted, Collingwood forged ahead and staved off Melbourne in the last quarter to seize the 1958 flag.

…Collingwood made the 1964 Grand Final against its nemesis, Melbourne.

With just minutes left in the game huge ruckman Ray Gabelich took off for a memorable three bounce run and slotted home a goal that put the Magpies ahead. Collingwood fans watched in horror as Melbourne back-pocket Neil Crompton bobbed up for a goal at the other end to pluck the premiership cup from Magpie hands.

The four-point loss was the start of a horror stretch for Bob Rose, one of the club’s favorite sons as a player and now the non-playing coach. the four point loss of 1964 would be followed by a tantalising one point defeat at the hands of St Kilda in the 1966 Grand Final then an almost inexplicable loss to Carlton in the 1970 play-off after the Magpies had led by 44 points at half-time.

…in 1976 the team’s [poor] performance [meant] it slumped to the first wooden spoon in Collingwood’s history.

Former Richmond coach Tom Hafey engineered a remarkable transformation in 1977 which took the team from the bottom of the ladder to a Grand final date with North Melbourne. Losing brilliant ex-South Australian Phil Carman because of a suspension incurred in the semi-final cost the Magpies dearly.

Still, they were 27 points ahead at the final change before North stormed home. A goal by Ross “Twiggy” Dunne secured a draw for the Magpies, but in the replay North bolted away at the end.

More heartbreak lay ahead with losses in the 1979, 1980 and 1981 Grand Finals. Hafey had extracted the most he could from a team that had few superstars, apart from 1979 Brownlow medallist Peter Moore and the brilliant Peter Daicos.

In 1982 the veteran coach was axed mid-season. In 1983, a new committee, the big spending “New Magpies”, swept into power.

South Australian Jack Cahill took the reins for two years then Bob Rose re-assumed the role he had last occupied in 1971.

Former Hawk champion Leigh Matthews was secured as assistant coach in 1986, but was thrust into the main role early in the year when Rose stepped aside at the same time as New Magpies leader Ranald Macdonald stood down from the presidency.

Matthews set about rebuilding the side through youngsters such as Darren Millane and Gavin Brown supplementing the experience of 100 goal full-forward Brian Taylor and determined skipper Tony Shaw.

In 1990 the Magpies barrelled into the Grand Final and this time made no mistakes. Against Essendon they ended a 32 year drought that had become one of the most highly publicised sagas in Australian sport.

…It was a time of change and in 1994 Collingwood moved the majority of its home games to the MCG and a decreasing amount of matches were played at Victoria Park.

Shaw proved to be an innovative coach, but he lacked material and too often the workload was left to a small batch of stars headed by Nathan Buckley who emerged as one of the game’s genuine superstars in the latter part of the decade.

A new broom swept through the club as Eddie [“Every-fucking-where”] McGuire took on the presidency in the 1999 season. The year also marked the final appearance at Victoria Park and the emotional end of an era.

With Shaw’s departure as coach, former Footscray and West Coast coach Michael Malthouse took over the post and the game’s most famous club looked ahead to a future full of fresh challenges… [2002] 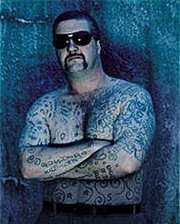 I live in Melbourne, Australia. I like anarchy. I don't like nazis. I enjoy eating pizza and drinking beer. I barrack for the greatest football team on Earth: Collingwood Magpies. The 2021 premiership's a cakewalk for the good old Collingwood.
View all posts by @ndy →
This entry was posted in Collingwood. Bookmark the permalink.