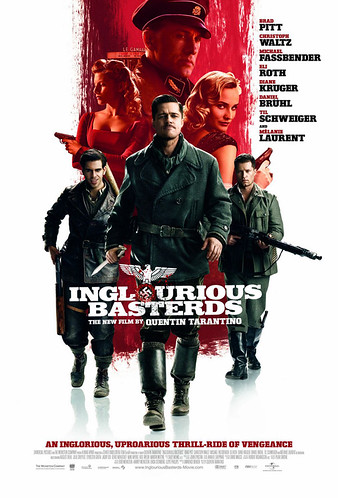 On Sunday I watched with amusement the utterly ridiculous but hugely entertaining film Inglourious Basterds.

In Nazi-occupied France during World War II, a group of Jewish-American soldiers known as “The Basterds” are chosen specifically to spread fear throughout the Third Reich by scalping and brutally killing Nazis. The Basterds soon cross paths with a French-Jewish teenage girl who runs a movie theater in Paris which is targeted by the soldiers.

The film is ridiculous in the sense that it turns history upside down; entertaining for its slick production values, preposterous script, a number of terrific performances and, of course, the spectacle of Nazis having their brains bashed in, their throats cut, their bodies kicked, punched, shot and blown up — and their heads scalped.

Much of the drama and the climax of the film is set in Paris. Funnily enough, the liberation of the city from Nazi control in August 1944 was spearheaded by Spanish anarchists: “Their tanks were named after civil war battles – Ebro, Teruel, Belchite, Madrid – and also called Don Quijote, and Durruti, after the anarchist leader.”

In summary, Quentin Tarantino’s (1963–) film is a critical, commercial and perhaps even a political success — at least in the sense that contemporary Nazis have been falling over themselves to denounce the film and to proclaim him an honorary Jew.

Now, y’all might of heard rumors about the armada happening soon. Well, we’ll be leaving a little earlier. We’re gonna be dropped into France, dressed as civilians. And once we’re in enemy territory, as a bushwackin’ guerrilla army, we’re gonna be doing one thing and one thing only… killing Nazis.

Members of nationalist socialist party conquered Europe through murder, torture, intimidation, and terror. And that’s exactly what we’re gonna do to them.

Now, I don’t know about y’all, but I sure as hell didn’t come down from the goddamn Smoky Mountains, cross five thousand miles of water, fight my way through half Sicily and then jump out of a fuckin’ air-o-plane to teach the Nazis lessons in humanity. Nazi ain’t got no humanity. They’re the foot soldiers of a Jew-hatin’, mass murderin’ maniac and they need to be dee-stroyed. That’s why every son of a bitch we find wearin’ a Nazi uniform, they’re gonna die.

Of course, while the Third Reich was brought to a halt after only 12 years, remnants of the Nazi movement are to be found all over the world, including Australia. The Global Financial Crisis™, in conjunction with the War on Terror™, has also provided a fertile economic and political context for a minor resurgence in the far right, especially in parts of Western and Eastern Europe.

One of the bloodier struggles occurring at the moment is in Putin’s Russia, where neo-Nazis and other fascists, mostly men in their late teens or early twenties, are happily butchering ‘foreigners’ and anti-fascist activists — mostly journalists (Anastasiya Baburova) and law-talking guys (Stanislav Markelov), punks and skinheads. (In this sense, Russian antifa are composed of elements that have assumed exactly the opposite approach of many local ‘punks’ and ‘skinheads’; a product, in turn, of the disembraining/yuppification of formally oppositional yoof subcultures in the West.) The sponsorship of ultra-nationalist sentiment by the Russian state, and the generally indifferent attitude of authorities to the many crimes committed in its name, may be understood if such phenomena are recognised for their broader political function: imposing discipline upon Russian society and labour.

In Germany, in state elections this past weekend, the far-right National Democratic Party (NPD) again gained seats in the Saxony state assembly, winning 5.5 percent of the vote, but that was a sharp fall from the 12 percent it won five years ago (Setback for Merkel’s party in German state polls, DPA, August 31, 2009). The fall in the NPD vote is presumably a reflection of voter disenchantment with the party’s corruption and incompetence. However, given the existence of a reasonably successful, and entrenched, extra-parliamentary far right, it’s not necessarily an indicator of a weakening of support for the far right as a whole. Further: “The vote in Saxony was noteworthy for another reason: despite significant losses, the neo-Nazi National Democratic Party was re-elected to the Dresden parliament, a first for the extremists” (Setbacks for Merkel’s CDU in state elections, Derek Scally, The Irish Times, August 31, 2009).

Federal elections are scheduled to take place on September 27, and it would appear that the main interest will be in gauging how much of a decline in support the major parties experience — increasingly viewed, as in Australia, of being largely and fundamentally indistinguishable.

In Australia, there are two ‘major’ (sic) events on the neo-Nazi calendar next month. The first is on Saturday September 12, in Melbourne; the second on the weekend of September 26/27 in Sydney: the location of both is suppressed by organisers for fear of disruption by political opponents.

On which subject, moar later…

I live in Melbourne, Australia. I like anarchy. I don't like nazis. I enjoy eating pizza and drinking beer. I barrack for the greatest football team on Earth: Collingwood Magpies. The 2023 premiership's a cakewalk for the good old Collingwood.
View all posts by @ndy →
This entry was posted in Anti-fascism, Broken Windows, Death, Film, History, War on Terror and tagged Inglourious Basterds. Bookmark the permalink.