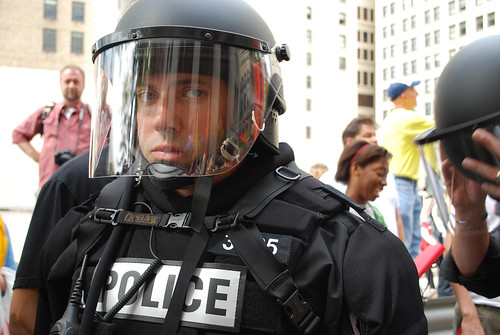 Protesting the G-20 Summit
Christopher Moraff
In These Times
September 26, 2009
A photo essay from Pittsburgh’s streets.

G-20 Summit in Pittsburgh Highlights Economic Decline of Former Steel Capital
Democracy Now!
September 25, 2009
Leaders and delegates for the G-20 arrived in Pittsburgh Thursday evening under the shadow of a police crackdown on protesters. The city is no stranger to protests and has a long history of labor uprisings. We speak to longtime Pittsburgh resident, historian, and labor organizer, Charles McCollester, on the changing face of this former steel capital.

Breaking News from the Pittsburgh G20 Protests
CrimethInc
September 24, 2009
Disclaimer: This was written the night of September 24, immediately following the events described, without time to verify all the reports summarized or assemble additional information. There may be errors; if so, we will correct them shortly. 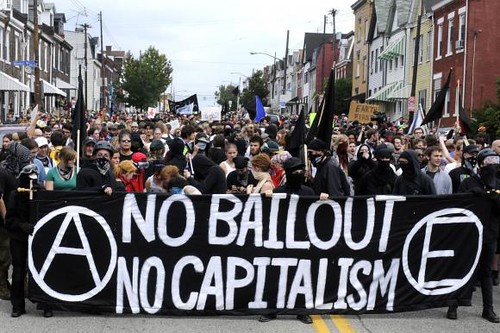 What makes the LRAD product unique is its ability to transmit your message with exceptional voice intelligibility and tonal clarity in a highly directional beam, even with significant ambient noise. The directionality of the LRAD device reduces the risk of exposing nearby personnel or peripheral bystanders to harmful audio levels.

The device was originally intended to be used by American warships to warn incoming vessels approaching without permission, and some reports claim that this is now a “non-lethal weapon”. Its output up to 155 db, focused at a distance, is sufficient to produce permanent ear damage and temporarily disrupt vision (The Weapon of Sound: Sonic Canon Gives Pirates an Earful, Marco Evers, Spiegel, November 11, 2005). It may also be used simply as a very effective megaphone prior to any use as a weapon.

These devices are currently used at Camp Bucca Iraq and are being tested in regions of Baghdad, Fallujah, along with other regions of Iraq. The LRAD device was on hand at protests of the 2004 Republican National Convention in New York City (RNC to Feature Unusual Forms of Sound: Unusual Forms of Sound to Emanate From RNC, Amanda Onion, ABC, August 25, 2004) but not used; it was extensively used against protesters in Georgia against opposition protesters in Tbilisi on November 2007 (Georgian police accused of brutality, Russia Today, November 9, 2007).

The magazine Foreign Policy has revealed that LRADs have been sold to the government of the People’s Republic of China. American companies have been banned from selling arms to China since the 1989 Tiananmen Square Massacre, but the LRAD is described by ATC as a “directed-sounds communications system” (American Company Sells ‘Sonic Blasters’ To China, The Top 10 Stories You Missed in 2008).

Local residents of Dusit in Bangkok witnessed it in use during protests of Triumph factory employees against dismissals on August 28th, 2009 (Leaders of Peaceful Protest Against Triumph Threatened with Arrest in Thailand, cleanclothes.org, September 7, 2009). The LRAD was used for the first time in the USA in Pittsburgh during the G20 summit on September 24-25th, 2009.

I live in Melbourne, Australia. I like anarchy. I don't like nazis. I enjoy eating pizza and drinking beer. I barrack for the greatest football team on Earth: Collingwood Magpies. The 2023 premiership's a cakewalk for the good old Collingwood.
View all posts by @ndy →
This entry was posted in Anarchism, Broken Windows, State / Politics, War on Terror and tagged G20, Pittsburgh. Bookmark the permalink.