Last week the group was reported to the police for distributing racially offensive CDs which spread hatred against Jews, Asians and blacks. The Home Office confirmed that its status would be re-assessed.

Baroness Neville-Jones said: “This is a flagrant example of the kind of hate speech that should be dealt with. There is a danger that this is growing in extent and goes unchecked.

“This government has taken such a strong stand on hate crime but if it goes unchecked groups like this will think they have tacit approval to act on what they are saying.

“The government should have been onto this group by now.”

The baroness has written to Mr Johnson complaining that as well as distributing the CDs, the group has a “field manual” which refers to “die-hard Nazis” who “still have an option through leaderless resistance and direct action … to stalk the worst enemies of our race. They expect no support and assistance but they deserve acknowledgement and understanding.”

Baroness Neville-Jones has asked the Home Secretary for his assessment of the group’s activities. She said she believed Blood & Honour was breaking the Public Order Act of 1986 and the Terrorism Acts of 2000 and 2006, which specify that “the encouragement of terrorism and the dissemination of terrorist publications are offences.

“On the face of it, there appears to be a very strong case for the proscription of Blood & Honour.”

A Home Office spokesperson said: “Proscription is a tough but necessary power to tackle terrorism. Decisions on proscription must be proportionate and based on evidence that a group is concerned in terrorism as defined in the Terrorism Act 2000.

“Organisations which cause us concern, including those which might change their name to avoid the consequences of proscription, are kept under constant review.

“As and when new material comes to light it is considered and the organisation re-assessed as part of that process.”

B&H is a proscribed organisation in Germany (2000) and Spain (2005); in Belgium and Holland, there has been public and parliamentary debate concerning its legality.

In April Spanish police officers arrested the founder of the Racial Volunteer Force (RVF), Mark Atkinson, in Benalmadena (Malaga) Spain. Atkinson’s detention followed the arrests of five men and a wom[a]n from the organisation in the UK in January in relation to material published on the RVF’s website and their magazine Stormer. Spanish police also arrested members of the Blood and Honour organisation within days of Atkinson’s arrest. The RVF is an offshoot from Combat 18 (C18) which collapsed after internal feuding in 1997-1998 that saw one of their founding members, Charlie Sargent, jailed for murder.

In Australia, B&H, in conjunction with another neo-Nazi skinhead network called the (Southern Cross) Hammerskins, organises an annual gig in Melbourne, and occasionally organises other gigs. Their next event is scheduled to take place on April 17 on the Gold Coast in Queensland — three days prior to Hitler’s birthday.

Authorities in Spain and Portugal have recently launched a crackdown against the Hammerskins. See : Hammerskins? ¡Ay, ay, ay, no me gusta! (August 12, 2009): “For the first time in Portugal, a collective of judges has handed down prison sentences for racial discrimination and inciting racial hatred. On Friday, the court at Monsanto in Lisbon found 31 out of 36 defendants – all boneheads – guilty of racism and crimes of a racist nature. Of these, six were handed down prison sentences, five were absolved, while the others received suspended prison sentences, were awarded fines or given community service orders. The longest prison sentence was awarded to Paulo Maia, who was given six years, while Mário Machado and Vasco Leitão – both linked to the extreme right party Partido Nacional Renovador (PNR) – were given four years. Paulo Maia was found guilty of racial discrimination, kidnapping, aggravated incitement, actual bodily harm and holding illegal arms. It was Maia who, two years ago in Amadora, shot and injured two men for racial reasons. Judge João Felgar also handed down a five-year prison sentence to defendant Pedro Isaque…”

B&H and the Hammerskins are very sensitive to criticism. On Monday, September 28, four boneheads paid an impromptu visit to the Melbourne Anarchist Resource Centre (MARC) in Northcote. The boneheads, one of whom was armed with mace, knocked over some shelving, threw some pamphlets on to the floor, threatened the handful of people in the space, and stated that if there was any more anti-fascist activity in Melbourne they would be back to kick some heads in. In the subsequent period, the front of the space has been repeatedly daubed with swastikas. 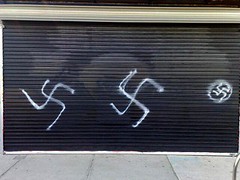 In addition to organising gigs and attacks upon community spaces, B&H (and the SCHS) also distributes “racially offensive CDs which spread hatred against Jews, Asians and blacks”; principally by way of the 9percent productions website. The website is the responsibility of Jesse *******, a Hammerskin from Melbourne. In addition to muzak, the site also sells merch (B&H, SCHS, Nazi pins and the like) and propaganda (The Turner Diaries by “Andrew MacDonald” (dead US nutzi William Pierce) and The Protocols of the Learned Elders of Zion, among others).

Last Friday (October 1) a crowd of over 70 people made it clear to a far-right gathering in Sydney that fascists are not welcome and that they will not be able to meet undisturbed.

A very successful community demonstration was held against KN (Klub National / Klub Nastiya) [aka Klub Nation / Klub Naziya], a monthly social gathering/drinking club for assorted neo-nazis, nationalists, racists and fascists. KN were holding their meeting at the Humanist Society Hall, on [10] Shepherd St, Chippendale. There were 5 or 6 fascists present when the crowd of over 50 people came around the corner carrying signs saying “All You Fascists Bound to Lose” and “No Racist Meeting in Our Neighbourhood”. They locked themselves in the building while demonstrators outside yelled “Nazis out” and banged on the door and windows. The protesters outside were quickly joined by dozens more people who came out of nearby houses and the café on the corner, who were outraged to find out that fascists were meeting in their neighbourhood and joined in showing their disapproval.

The police came quickly but did not attempt to move the demonstrators on, though they kept people away from the building. After about an hour, the Public Order and Riot Squad blocked off a side street and pushed protesters back in order to allow a couple of nazi skinheads to enter the side door of the building. It was only the large police presence that allowed the fascists to have their get together.

If KN try to hold another meeting next month (November 6) at the Humanist Hall – and if the Humanist Society let them meet there – there will be a far bigger demonstration. If they get the message that they are not welcome in Chippendale and move somewhere else, we will follow them.

NB. KN — for which the two principal organisers are ‘The Space Wizard’ (Daevid Palmer) and Jason Rafty — claim to have been meeting regularly in Sydney since 2003. Rafty posts as ‘KlubNation’ on SF, while Palmer posted as ‘daevid88’.

In 2007, the ‘Anglo-Australian National Community Council’ — aka Darrin Hodges — met at the House.

David Duffy is the humanist responsible for bookings.

I live in Melbourne, Australia. I like anarchy. I don't like nazis. I enjoy eating pizza and drinking beer. I barrack for the greatest football team on Earth: Collingwood Magpies. The 2021 premiership's a cakewalk for the good old Collingwood.
View all posts by @ndy →
This entry was posted in Anti-fascism, State / Politics and tagged Baroness Neville-Jones, Blood & Honour. Bookmark the permalink.