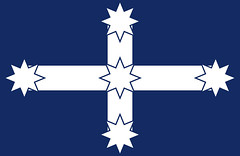 In July 2001, the lying little rodent and soon-to-be ex-PM John HoWARd announced his intention to investigate backdoor shenanigans in the building industry. From late 2001 until late 2002, the Royal Commission into the Building and Construction Industry met. It, in turn, established the Office of the Australian Building and Construction Commissioner (ABCC) on October 1, 2005. In a stroke of pure, unadulterated genius:

The commission ruled this year that the Eureka flag was a union-related symbol that implied CFMEU membership was compulsory on a building site, in breach of the freedom-of-association provisions of WorkChoices.

A letter from builder Baulderstone Hornibrook’s Victorian general manager, Ian Luck, to ABCC official Helen Evenden, seen by The Age, confirms that the builder has recently been audited by the commission and has been found in breach of the freedom-of-association provisions. If companies refuse to comply with the commission’s orders they can be banned, under the Government’s National Code of Practice, from doing construction work on any Federal Government-owned building site. Mr Luck said the company would “reinforce to all Victorian operation staff that no advertising material of a political nature, or material that is contrary to the code, is to appear on our sites”.

But ABCC commissioner John Lloyd denied he had ordered the removal of straight political material, only union advertising.

“In its report to the company, the ABCC identified the display of numerous union posters and paraphernalia as inconsistent with the national code,” he said.

“The ABCC did not identify any ‘material of a political nature’ as being inconsistent with the code. The term was used by the company, not the ABCC.”

A Baulderstone Hornibrook spokesman said the company was “not in a position to comment”.

The cancer charity flag is designed to raise money for the John Cummins Memorial Fund, named after the former union militant who died of a tumour last year.

His widow, Di, said yesterday the charity was a sub-fund of the Melbourne Community Foundation, set up to donate money to the Austin Hospital for cancer support, and towards scholarships for disadvantaged young people in Melbourne’s north.

“I’m not surprised, but I’m extremely disappointed with the ABCC, and I probably wouldn’t want to say any stronger emotions than that,” Ms Cummins said. ~ Watchdog accused over site bans on stickers, Michael Bachelard, The Age, November 14, 2007

Note that “ABC[C] Commissioner John Lloyd today [November 14] reiterated that the CFMEU’s claims of political interference by the ABCC are completely false. “These claims are unfounded, unsubstantiated and incorrect. They are merely claims by the union,” Mr Lloyd said”.

Then again, that’s merely a claim by the ABCC Commissioner.

In any case, the absurdity of the Commissioner’s position is revealed in the claim that “ABCC inspectors are unlikely to nominate the flying of a single union flag on a site as a concern. However, if the site shed is covered in union stickers and all workers wear union paraphernalia there may be a breach of the freedom of association provisions of the Code.” In other words, if a site contains a majority of union members, and these members proclaim their membership of the union — say, by putting union stickers on a site shed, and/or wearing “union paraphernalia” — they are in effect violating The Sacred Code of Freedom of Association As Defined By the ABCC. That aside, in the name of ‘choice’ and ‘freedom’, the Commission in its wisdom has actually sought to prevent workers from displaying a symbol that just last year was nominated as being a Victorian Icon:

The Awards were announced in March at the Young & Jackson Hotel, by Victorian Minister for Planning Rob Hulls who said the program had proven to be an exciting new event on Victoria’s calendar, providing an opportunity to celebrate buildings, places and events for their human history.

“The Awards have been a wonderful opportunity for the Victorian community to be involved in identifying icons that have made an outstanding contribution to our contemporary cultural identity,” Mr Hulls said.

“It is a delight to acknowledge and celebrate a revered sporting mecca – the MCG; our racing hero Phar Lap; the beloved Puffing Billy; the emblem of our most significant rebellion – the Eureka Flag; a symbol of Melbourne’s live music scene – the Palace Entertainment Complex; and what ignited the tradition of meeting under the clocks – Flinders Street Station,” Anthony Knight, Deputy Chair of the National Trust of Australia – Victoria said.

Anything to crush the spirit of rebellion eh?

Performers: Shane Howard and friends, Archie Roach and others TBA.

The HoWARd Government has banned the Eureka flag on building sites around Australia. This is an attack on our democratic rights to organise collectively in unions and speak out against injustice. It’s an attack on the fighting tradition of the Eureka rebellion.

The Eureka flag was first raised in 1854 by the Ballarat miners in a popular uprising against British colonial oppression and injustice. For more than 150 years it’s been a proud symbol of ordinary people’s struggles for justice, democratic rights and a fair go.

Unions, workers, rural communities, students and community groups have raised the Eureka flag in their many diverse struggles for a more just and democratic society. It’s a proud fighting symbol for a just, democratic and an independent Australia.

Australia’s multiculturalism was born at the Eureka Stockade rebellion. Among the 20 nationalities that took part in the uprising were Italians, Jamaicans, black and white Americans, Irish, British, Dutch and different religions, including Christians and Jews. They were all united and pledged to stand by each other under the Eureka flag, “We swear by the Southern Cross to stand truly by each other and fight to defend our rights and liberties.”

The rebel leaders declared the Eureka flag as “the refuge of all oppressed people from all countries on earth.”

I live in Melbourne, Australia. I like anarchy. I don't like nazis. I enjoy eating pizza and drinking beer. I barrack for the greatest football team on Earth: Collingwood Magpies. The 2023 premiership's a cakewalk for the good old Collingwood.
View all posts by @ndy →
This entry was posted in History, State / Politics. Bookmark the permalink.