Just “chillin’ and drinkin’ da brews in my krib y’all” when “check dis shit”… At the end of the year, on the weekend of November 18/19, Melbourne will p(l)ay host to a meeting of yet another bloody neo-liberal institution, the so-called ‘G20‘:

The members of the G-20 are the finance ministers and central bank governors of 19 [states]: Argentina, Australia, Brazil, Canada, China, France, Germany, India, Indonesia, Italy, Japan, Mexico, Russia, Saudi Arabia, South Africa, South Korea, Turkey, the United Kingdom and the United States of America. The European Union is also a member, represented by the rotating Council presidency and the European Central Bank. To ensure global economic fora and institutions work together, the Managing Director of the International Monetary Fund (IMF) and the President of the World Bank, plus the chairs of the International Monetary and Financial Committee and Development Committee of the IMF and World Bank, also participate in G-20 meetings on an ex-officio basis.

The G-20 thus brings together important industrial and emerging-market [states] from all regions of the world. Together, member [states] represent around 90 per cent of global [GNP], 80 per cent of world trade (including EU intra-trade) as well as two-thirds of the world’s population. The G-20’s economic weight and broad membership gives it a high degree of legitimacy and influence over the management of the global economy and financial system.

Translated from Newspeak into English, what this means is that in November in Melbourne, some of the world’s leading bean-counters from an assortment of twenty or so of the world’s most powerful states and global financial institutions will be gathering to discuss (better) ways of continuing to divide up the spoils of global capitalism among the world’s elites: — without simultaneously plunging the global economic system into another ‘crisis’ of the sort that prompted the group’s formation in Berlin in 1999. (NB. ‘Crisis’, like ‘democracy’ and ‘freedom’, being another technical term meaning ‘seriously dysfunctional to continued profit-making’; not, say, ‘that which endangers the continued survival of the world’s impoverished masses’.) Better yet, the pointy-heads would like to cobble together a system that will function as a relatively more ‘stable’ means of securing ‘growth’ — that is, the continued accumulation of profitable things — while ensuring that the vastly inequitable global distribution of wealth remains just that… that is, assuming that inequality is not further entrenched (as most current indicators suggest is highly likely, if not certain).

Reclaim Globalisation, a group associated with Friends of The Earth, are holding an organising meeting to discuss possible responses to the G20 meeting this Saturday February 4th, from 2-4pm, upstairs @ Friends of the Earth, 312 Smith St (cnr Perry St), Collingwood. They make the following points:

The primary goal of the G20 is to discuss and develop policies that promote the “high and sustainable growth” of the global economy. It does this in part through promoting policies consistent with the G20 Accord for Sustained Growth agreed to in 2004. This Accord stresses a range of neoliberal policies, including:

In 2006 the theme of the G20 meeting will be “Building and Sustaining Prosperity”. The issues to be discussed will include domestic reforms to achieve “sustained growth”, global energy and resource commodity markets, ‘reform’ of the World Bank and IMF, and the impact of demographic changes due to an ageing population…

The 2004 Chairperson of the G20, Hans Eichel, stated that “it is not without reason that many observers accord the G20 an important role – for some, even the most important role in the future – in global governance”. 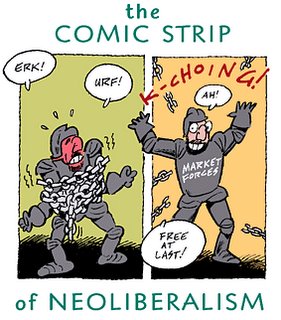