Oh! What a Lovely War // Noam Chomsky in HARDtalk

Oh! What a Lovely War in Afghanistan.

And so far away!

Better still, upon visiting Australian soldiers in ‘Kamp Holland’, PM KRudd has declared that “We in Australia are here for the long haul… We from Australia will remain for the long haul.” Sadly, KRudd had to hop on a plane shortly thereafter, and will soon be (re-)joining other stay-at-home patriots back in Canberra, making his own personal ‘long haul’ a rather short one.

In any event, Operation SLIPPER — involving approximately 1550 Australian soldiers — is going really well, apparently, with billions upon billions of dollars flowing steadily into the bulging pockets of Afghani elites… tho’ a handful of children are not getting enough to eat, and a few civilians have been killed. And yeah, a few chicks are complaining, but then, don’t they always? 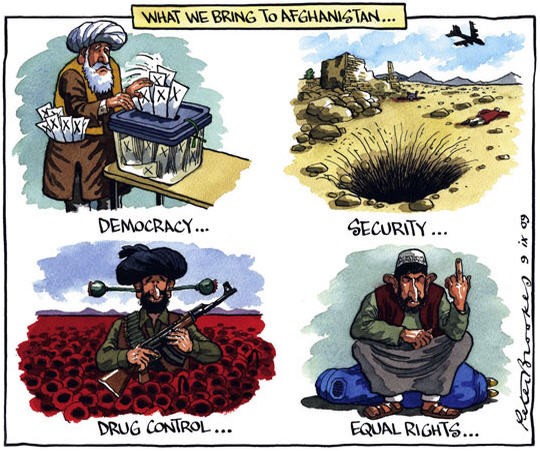 As a final illustration of the callousness of the American response to what the mass media reveal, consider a small item in the New York Times of 18 March 1968 headed, ‘Army Exhibit Bars Simulated Shooting at Vietnamese Hut’. The items reports an attempt by the ‘peace movement’ to disrupt an exhibition in the Chicago Museum of Science and Industry:

Beginning today, visitors can no longer enter a helicopter for simulated firing of a machine gun at targets in a diorama of the Vietnam Central Highlands. The targets were a hut, two bridges and an ammunition dump, and a light flashed when a hit was scored.

Apparently it was great fun for the kiddies until those damned peaceniks turned up and started one of those interminable demonstrations, even occupying the exhibit. According to the Times report, ‘demonstrators particularly objected to children being permitted to “fire” at the hut, even though no people appear there or elsewhere in the diorama’, which just shows how unreasonable peaceniks can be. Although it is small compensation for the closing of this entertaining exhibit, ‘visitors, however, may still test their skills elsewhere in the exhibit by simulated firing of an anti-tank weapon and several models of rifles’.

Those and a thousand other examples testify to moral degeneracy on such a scale that talk about the ‘normal channels’ of political action and protest becomes meaningless or hypocritical. We have to ask ourselves whether what is needed in the United States is dissent — or denazification. The question is a debatable one. Reasonable people may differ. The fact that the question is even debatable is a terrifying thing. To me it seems that what is needed is a kind of denazification. What is more, there is no powerful, outside force that can call us to account — the change will have to come from within.

I live in Melbourne, Australia. I like anarchy. I don't like nazis. I enjoy eating pizza and drinking beer. I barrack for the greatest football team on Earth: Collingwood Magpies. The 2021 premiership's a cakewalk for the good old Collingwood.
View all posts by @ndy →
This entry was posted in Broken Windows, Death, History, State / Politics, War on Terror and tagged Afghanistan, denazification, Noam Chomsky. Bookmark the permalink.