The Left protests when ministers and officials favour business mates or cruelly lock up refugees, but many of us have a vested interest in the status quo. As compensation for its authoritarian streak, the state has become a generous benefactor to progressives, either employing us to manage its utilities and programs for the marginalised, or making everyone from artists to community groups and scholars jump through hoops of red tape in a scramble for the next grant. But the state is more tar baby than magic pudding, leaving a residue of compromise and passivity on those too dependent on its patronage.

If you’re a middle-class progressive, your conscience may prick you as you suck on the government teat (everyone has their cross to bear).

The heavy 5-meter-long (16-foot-long), 40-kilogram (90-pound) iron sign at the former Nazi death camp in southern Poland where more than 1 million people died during World War II was unscrewed on one side and torn off on the other, police spokeswoman Katarzyna Padlo said.

An exact replica of the sign — made by the museum after World War II — was immediately hung in place of the missing original to fill in the empty space inside the heads of ALP members, but all visitors were being informed about the theft, another museum spokesman, Pawel Sawicki, said…

At the onset of the twenty first century work and production have become ends in themselves. The resulting material affluence is accompanied by increasing levels of stress, insecurity, depression, crime, and drug taking. Escalating production and consumption are also destroying the environment on which life itself depends. Yet employment has become such a priority that much environmental degradation is justified merely on the grounds that it provides jobs. And people are so concerned to keep their jobs that they are willing to do what their employers require of them even if they believe it is wrong or environmentally destructive.

The social benefit of having the majority of able-bodied people in a society working hard all week goes unquestioned, particularly by those who work hardest. Few people today can imagine a society that does not revolve around work. How did paid work come to be so central to our lives? Why is it that so many people wouldn’t know what to do with themselves or who they were if they did not have their jobs?

In this major new book, Sharon Beder unearths the origins and the practices of a triumphant culture of work in which the wealthy are respected and inequality is justified. Dr Beder shows that these values are neither natural nor inevitable. They have been actively promoted – through religious preaching, corporate propaganda, the education system, and socialisation – by those who benefit most from them.

Selling The Work Ethic provides an absorbing account and critique of this central aspect of modern capitalist society. Prompted by her conviction that humanity needs to unlearn and change these powerfully held but now pathological values if we are to reverse the declining quality of life in industrial society, Dr Beder illuminates the impasse we are now in. 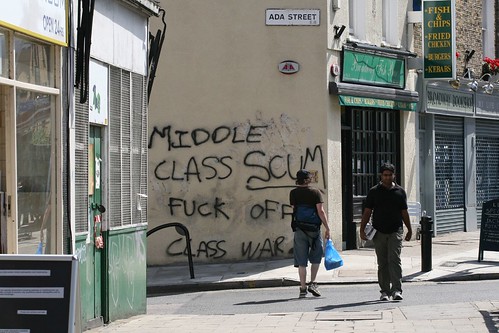 I live in Melbourne, Australia. I like anarchy. I don't like nazis. I enjoy eating pizza and drinking beer. I barrack for the greatest football team on Earth: Collingwood Magpies. The 2021 premiership's a cakewalk for the good old Collingwood.
View all posts by @ndy →
This entry was posted in !nataS, State / Politics and tagged 'Arbeit Macht Frei'. Bookmark the permalink.