Michael Costa is an odd fellow 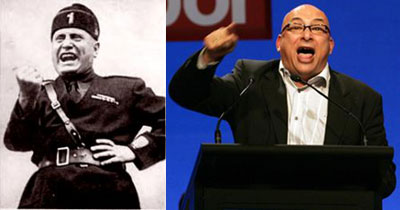 MICHAEL COSTA stormed across the room – his face flushed, his hands clenched – towards John Robertson, the secretary of Unions NSW. “You blokes can get fucked,” he screamed. “You’re going to look like dickheads on Monday morning.”

Er, well yeah, maybe. Certainly, the NSW Labor caucus doesn’t seem to object to making the vast majority of delegates to the annual NSW ALP conference who voted (702/107) against the privatisation of the electricity system look like “dickheads”. However, as it stands, Costa & Co. may be forced to discipline the ALP rank ‘n’ file and the unions a few more times before they — perhaps inevitably — capitulate…

The Right Honourable Michael ‘I did not have sex with that woman’ Costa is a former Trotskyist (a member of the Socialist Workers’ Party, now the DSP), union and ALP Secretary. “There’s never been a Labor Council Secretary like Michael Costa”, wrote another former Secretary, Michael Easson: “Few could match… his grasp of business and strategic nous as well as his feel for getting a message across plainly, often bluntly… We’ve not seen anything like it. One day soon, I suspect a similar observation might be passed on his role as a Minister in a NSW Labor Government.” (See also : ALP faithful grow into mandarins, Brad Norington, The Australian, April 14, 2007.) Costa is also a trainspotter, and revealed as much when he addressed fellow Senator Lee Rhiannon (May 12, 2004):

Union Power and the New Mandarins

The Statement of Accord between the Australian Labor Party (ALP) and the Australian Council of Trade Unions (ACTU) was endorsed in February 1983/4. Shortly after the ALP won the federal election the Accord became government policy. In September 1983 the Australian Conciliation and Arbitration Commission agreed to establish a centralised wage fixing system based on productivity and price movements as outlined in the Statement of Accord. The ACTU agreed to exercise restraint in wage claims in exchange for social programs.

During the first three years of the Accord wages were indexed, but at the end of 1985-86 the government and the ACTU agreed to partially index wages. Subsequently, indexation was abandoned and wage adjustments were significantly below the inflation rate. In 1987 the Industrial Relations Commission recommended a two tier system. The first tier was an automatic flat increase for everyone. The second tier was related to identifiable improvement in productivity. In the following years the two tier system remained with increasing flexibility occurring. For example in 1991 the first wage increase was replaced by a tax cut. The Accord was abandoned in March 1996 following the change of government.

See also : Industrial Disputes, Australia, December 2007, ABS, March 13, 2008. Note that the number of disputes is one indicator of industrial unrest; the number of participants, and longevity of the dispute, are others. Some of the key disputes which the ALP effectively neutralised towards the beginning of its last period of Federal rule include the Australian Pilots’ dispute of 1989 and, prior to that, the successful de-construction of the Victorian Builders’ Labourers’ Federation. On the BLF, see Liz Ross, Dare to Struggle, Dare to Win! Builders Labourers Fight Deregistration 1981-1994, Vulgar Books, 2004. Finally, John Stone of the HR Nicholls Society tips his hat to the Drover’s Dog:

By way of illustration, I remind you of the airline pilots’ dispute in August-September, 1989. In that dispute, we saw a Prime Minister actively facilitating:

o Use of ‘the troops’ (RAAF) to help defeat the walkout by a key body of airline employees;
o The bringing of common law actions for breach of contract against individual pilots to the same end;
o Use of Sections 45D and 45E of the Trade Practices Act for the same purpose;
o The import of foreign pilots to take the place of Australian pilots who had withdrawn their labour;
o The import of charter aircraft (and associated foreign crews) to supply services being withheld by the Australian pilots; and even
o The provision of some kind of financial assistance designed to assist a major employer (Ansett Airlines) and thus help ‘keep it in the field’ until the Australian Federation of Air Pilots had been crushed.

Mr Hawke’s zeal in all these matters thus went even further than our own. The H.R. Nicholls Society had never argued that a body of employees should not have the right to be represented by a union (or Association) of their own free choosing—a basic right which Mr Hawke and Sir Peter [Abeles] were determined to deny to the pilots.

See also : Social Democracy: No Future? Introduction to Articles on the Retreat of Social Democracy, Aufheben, 7, Autumn 1998: “Social democracy is in retreat. That its institutions continue to be the focus of struggles raises the question of what we want and how we should fight. But to answer such questions requires a proper understanding of the nature of social democracy. In this, the Introduction to a series of articles on the current retreat of social democracy, we unravel the essence of this dominant form of political mediation of working class needs.”

The Retreat of Social Democracy… Re-imposition of Work in Britain and the ‘Social Europe’, Aufheben, 8, Autumn 1999: “In this, the latest exciting instalment of our analysis of social democracy in retreat, we show how the left-of-centre governments now dominating the European political arena are attempting to re-impose work through common neo-reformist policies. We argue that reports of social democracy’s rebirth have been greatly exaggerated: and we never lamented its passing anyway.”

I live in Melbourne, Australia. I like anarchy. I don't like nazis. I enjoy eating pizza and drinking beer. I barrack for the greatest football team on Earth: Collingwood Magpies. The 2021 premiership's a cakewalk for the good old Collingwood.
View all posts by @ndy →
This entry was posted in !nataS, History, State / Politics. Bookmark the permalink.

1 Response to Michael Costa is an odd fellow