Update : metacafe to the rescue.

Apparently, one of my YouTube vids contains “gross-out videos of accidents, dead bodies or similar things intended to be shocking, sensational or disrespectful”.

Sometimes people do get hurt and it’s inevitable that these events may be documented on YouTube. However, YouTube is not a shock site. It’s not okay to post gross-out videos of accidents, dead bodies or similar things intended to be shocking, sensational or disrespectful. If a video is particularly graphic or disturbing, it should be balanced with additional educational or documentary context and information.

After successfully navigating the maze that is YouTube ‘Help’, I wrote the following message in reply:

The video in question concerns an Australian-based neo-Nazi Internet radio host using the pseudonym ‘Derrick MacThomas’, and is based on an extract from one of his broadcasts. The message I received from YouTube states: “It’s not okay to post gross-out videos of accidents, dead bodies or similar things intended to be shocking, sensational or disrespectful. If a video is particularly graphic or disturbing, it should be balanced with additional educational or documentary context and information.”

Having reviewed the video in question, it appears that this may be a reference to two imgs: one of a Klansman on fire, the other of the corpse of Mussolini. The first img appears for app 30 secs; the img of Mussolini — a still — ends the video, and appears for app 1:45. It is a v famous img, appears in over 50 other vids on YT, and is included on 1000s of sites dedicated to recalling WWII.

I would like to re-upload the video, but would obv need to know exactly what the nature of the alleged breach of Community Guidelines is before I do so as I do not wish my acct to be suspended.

Some greater clarification from YT would be much appreciated. I am also more than happy to include what YT suggests “additional educational or documentary context and information”.

YouTube is very helpful, and I received the following message in response:

YouTube staff review flagged videos 24 hours a day, seven days a week to determine whether they violate our Community Guidelines. When a video or account is brought to our attention we investigate and take action if necessary.

We are unable to provide specific detail regarding your account suspension or your video’s removal. For more information on our what we consider inappropriate content or conduct while using YouTube, please visit our Community Guidelines and Tips at http://www.youtube.com/t/community_guidelines and our Help Center article at http://help.youtube.com/support/youtube/bin/answer.py?answer=92486.

We will investigate your issue and take action if necessary. We will contact you only if we require more information regarding your issue.

Other fun facts I’ve discovered over the last few weeks is that the defunct Seattle punk rawk band ‘Christ On A Crutch’ is pwned by Warner Music Group (WMG), presumably by way of Warner/Chappell Music.

Meaning that really is no business like punk business! 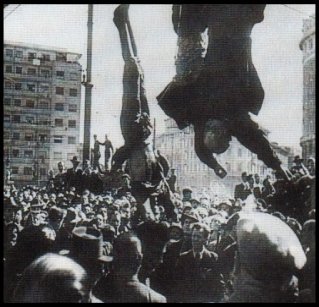 I live in Melbourne, Australia. I like anarchy. I don't like nazis. I enjoy eating pizza and drinking beer. I barrack for the greatest football team on Earth: Collingwood Magpies. The 2023 premiership's a cakewalk for the good old Collingwood.
View all posts by @ndy →
This entry was posted in !nataS, Anti-fascism, Media and tagged YouTube. Bookmark the permalink.