Ratso is funny… Pell… less so 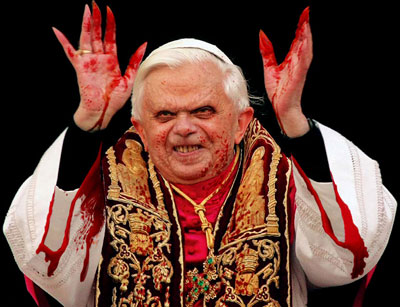 That wascally wodent Ratso is soon to arrive on our shores, although his good friend (Blessed) Pier Giorgio Frassati — despite being dead — has beaten him to the punch, arriving on June 27. Sydney Archbishop George Pell has gone to some trouble to arrange for the dead Italian to holiday Down Under, but his care for the living — well, some minor segment of his flock, anyway — leaves a great deal to be desired, it seems.

In fact, apologies appear to be in order from George, following the revelation (“It’s A Miracle!”) that he, ah, ‘misled’ the victim of sexual abuse by a Catholic priest:

New evidence has been revealed showing how its most senior figure, Cardinal George Pell, misled a man who complained of being abused by a Sydney priest. ABC1’s Lateline has documents that show Cardinal Pell wrote to the man telling him his sex assault allegation was not being upheld because the church had received no other complaints of sexual assault by the priest. But on the very same day, the Archbishop signed a letter to another man, upholding his claim that the same priest had sexually assaulted him when he was a young altar boy. The new documents also show that Cardinal Pell ignored the recommendations of the church’s own investigation. While many in the church are anticipating that the Pope will shortly apologise for the Australian church’s role in sexual abuse, the victim in this case says Cardinal Pell destroyed his faith and damaged his life. A letter from the Church’s lawyers suggested that for legal reasons the ABC should not reveal the documents.

This reaction from the Church is, of course, to be expected: these Men of God know that Law-Talking Guys are the first port-of-call in a storm. The second, perhaps, being Men With Guns; such, at least, appears to be the case in reference to the Church’s efforts to ensure Australia is a Paradise for Fellow Worker Ratso. Well, that’s what some hack reckons:

THE Catholic Church asked the NSW Government to give police extraordinary powers for World Youth Day and to protect more than 500 sites from ambush marketing. While Premier Morris Iemma said no “special deal” had been done for this month’s event, regulations passed last week go beyond last year’s APEC forum. The Australian understands the Government acted after a meeting of the Local Organising Committee of the Catholic Church on May 23. The committee, chaired by Cardinal George Pell, was concerned not only with quarantining protesters but also with protecting revenues from merchandise sales and advertising. The Government gazetted the regulations, which carry fines up to $5500, without their detail being discussed in parliament…

Deliver Us From Evil:

Just face the truth or fund the farce

When all is done
Who shall benefit? Who is the one?
Not to those who pass on
But those dictators divine waving their deceitful wands

1 Response to Ratso is funny… Pell… less so