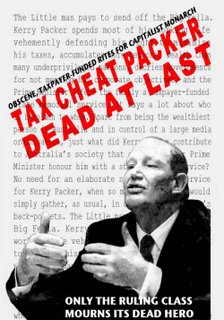 If John Howard, Kim Beazley and co. are to give Kerry Packer a send-off, why shouldn’t we hold our own anti-state, anti-capitalist “dis-memorial” at the same time? After all, it’s us, the taxpayers, who are paying for Packer’s send-off, not Howard. And state memorial services are supposed to be for people who have made an outstanding contribution to Australia.

Packer, when he wasn’t gambling or commodifying sport, spent most of his time avoiding paying tax, despite his huge income. After his death, his own sycophantic media, along with most of the mainstream media, praised his generosity, citing his payment for the installation of respirators in some ambulances. That little gesture cost Packer less than he lost gambling, and much less than he avoided in tax.

Packer’s obsession with greed represents so much of what is wrong in our society. So why does Howard want to honour him?

[Kerry Packer loved his country and understood ordinary Australians, Prime Minister John Howard said at the service. “The key to his life and to his great success and the key to the enormous impact he had on the Australian community was his understanding about what made the ordinary bloke tick,” he said. “When we saw each other on a regular basis it was always to talk about Australia, to talk about ways in which you, sport, could make it better.” Mr Howard’s tribute followed the singing of the national anthem and an opening address from one of Mr Packer’s closest friends, gay Sydney radio broadcaster Alan Jones.]

Packer used his media empire to help Howard become prime minister, and to keep him there. The Packer and Murdoch media duopoly continually put a positive spin on Howard’s economic policies — policies that have done so much to make the rich richer while the rest of us find our working conditions deteriorating and our rent or mortgage increasing.

Howard repaid the favour by amending the media cross-ownership laws to allow Packer and Murdoch to gobble up smaller media, concentrating almost all of the commercial media in their hands. At the same time, the government cut funding for public media (ABC and SBS). And Howard — like Bob Hawke, Paul Keating, Bob Carr and Kim Beazley — actually admire capitalist bullies like Packer, since they have so much in common.

The poster for our “dis-memorial” action is an homage to Chips Mackinolty’s poster when Liberal PM Robert Menzies died in 1978 — an image of Menzies with the main text “Pig Iron Bob, dead at last”. The background words on the poster come from letters to the editor in the Sydney Morning Herald: “No need for an elaborate state memorial service for Kerry, when so many politicians could simply gather, as usual, in one of the great man’s back pockets”. And the photo? “Nick! Gimme your kidney, Nick!”

While the mainstream media speculates about whether Kerry’s son James’ ex-wife, Jodhi Meares, and Kerry’s “friend”, Julie Trethowan, will attend the memorial service, consider whether Kerry achieved the kind of successful euthanasia that is not available to ordinary Australians?

Just as Hawke declared a public holiday when Australia won the America’s Cup, the least Howard can do is make his Packer-dead-day the equal of the Queen’s birthday, Australia day, Xmess day and the like. If Howard is to be consistent about Packer’s send off being taxpayer funded, and hence open to the public, he must declare February 17 a public holiday. He could include this in his Work Choices legislation!

Only the ruling class mourns its dead heroes. So what can we do? Stop buying Murdoch or Packer newspapers. Stop watching their TV channels. Stop voting for political parties that provide alibis for corporate domination of our lives…

:: As if to confirm the power of the state-corporate nexus Packer championed, the SMH reports that police have arrested six people for the crime of attending Packer’s anti-state sponsored dis-memorial: Ms Natasha Lang, 46, a promotions manager of Vaucluse, who came to watch the guests arrive, said: “Kerry Packer was [a] fantastic person. Everyone should take a leaf out of his book. I think the protest was shocking. They’ve got nothing better to do than complain when we are a positive country and we need to get positive energy happening.”

I live in Melbourne, Australia. I like anarchy. I don't like nazis. I enjoy eating pizza and drinking beer. I barrack for the greatest football team on Earth: Collingwood Magpies. The 2023 premiership's a cakewalk for the good old Collingwood.
View all posts by @ndy →
This entry was posted in Art, History, Media, State / Politics, Television. Bookmark the permalink.