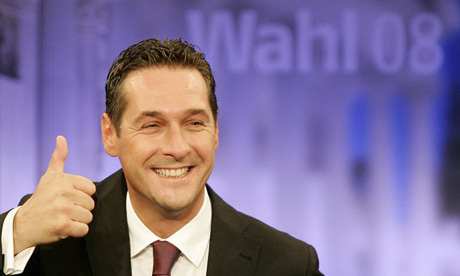 He has been filmed in forests, carrying arms and wearing paramilitary fatigues in the company of banned German neo-Nazis. Islam, he says, is “the fascism of the 21st century”. He was photographed apparently giving a three-fingered neo-Nazi salute – though he says he was ordering three beers.

He mocks gay people; wants a ministry for the deportation of immigrants; says “Vienna must not become Istanbul”; hopes to repeal laws banning Nazi revivalism, and is pushing for a constitutional ban on the building of minarets. Heinz-Christian Strache, a former dental technician, is the new star of Austrian politics and the new poster boy of Europe’s extreme right…

On the opposite side of the political spectrum, and 100 years ago, The First War on Terror (BBC Radio 3, September 28, 2008 — for a limited time only); a fascinating account of fin de siècle London, moral and social panics, anarchism, and terrorism. Plus ça change, plus c’est la même chose:

Novelist Hari Kunzru explores how pulp fiction writers and great novelists got to grips with the UK’s first major ‘war on terror’ – against the Anarchists of Victorian and Edwardian times. These ‘scare novels’ responded to the Anarchists’ wish to abolish the State by depicting outlandish scenarios such as political assassinations and large-scale bombings.

He also explores the world of the real anarchists in London’s immigrant communities – most of whom were peaceful and cultured East End Jewish activists, trying to improve conditions in the garment trade – in contrast to these terrorists the novelists imagined and the popular press feared.

Bringing the programme up to date, Hari and literary scholars Laurence Davies and Deaglan O’Donghaile also briefly consider the modern response to 9/11, asking whether novels on terrorism ever get it right.

Two of the major novels discussed are Joseph Conrad’s The Secret Agent (1907) and G.K. Chesterton’s The Man Who Was Thursday: A Nightmare (1908).

Conrad’s novel was inspired by the (spectacularly failed) Greenwich Observatory bomb plot of 1894, in which the French anarchist Martial Bourdin (1868–1894) managed to blow himself up — but not the Observatory. The police later raided the Club Autonomie in London — a popular club for foreign anarchists, including Bourdin.

88 years later, on November 18, 1982, 22 year-old anarchist punk Neil Roberts attempted to blow up the Wanganui Computer Centre in Aotearoa / New Zealand, and lost his life in doing so. Neil’s final words, graffitied on a concrete wall opposite the Computer Centre, were also to be his epitaph: “We have maintained a silence closely resembling stupidity”. The Centre was eventually closed, in mid-2005.

The BBC doco also makes reference to the Wasall Anarchists, and their alleged bomb plot of 1892. In reality, the Anarchists were the subject of a gub’mint plot, orchestrated by Special Branch. Although the British Home Office and the Metropolitan Police attempted to conceal the evidence for over 80 years, recent research into police files has revealed that the plot was instigated by Auguste Coulon, an agent provocateur of Special Branch Inspector William Melville, who would go on to found what became MI5. John Quail:

The arrest, trial and sentencing of the Walsall Anarchists in 1892 deserve more attention than they have received from the historians of the left in Britain. From the point of view of the more liberal, there was a disconcertingly straightforward use of agents provocateur by the police. From the point of view of historians of the growth of institutions connected with the working-class movement, the existence of options for propaganda by deed and the reasons for the rejection of these options should have given more cause for thought. In any case, the circumstances were unusual enough for notice. As ex-Detective Sergeant McIntyre was to say, ‘Quite a sensation was caused at the time by the appearance of this new class of revolutionist. It is safe to say that no conspiracy of quite the same nature had been known in England during this century’…

The Times, then as now (see Chris Campling’s review of the BBC doco, ‘How fumbling anarchists provoked the first war on terror’, September 30, 2008), gave the Establishment view:

The offence with which the prisoners were charged is one of the most dastardly and wicked which it is possible to conceive. Like treason it is aimed at the very heart of the State, but it is not designed to destroy the existing Government alone. It strikes at all Governments, and behind all Governments it strikes at those elementary social rights for the defence of which all forms and methods of civil rules exist. The crime of which the Walsall prisoners have been found guilty was no isolated act ( … ) Hate, envy, the lust of plunder, and the lust of bloodshed are stamped on every line of the Anarchist literature read at Walsall and on every word of the confessions made by RAVACHOL. ~ April 5, 1892

John Quail’s The Slow Burning Fuse: The lost history of the British Anarchists (Paladin Books, 1978) is the best (and one of the only) study of this period. Also of interest is Isabel Meredith’s A Girl Among the Anarchists: “Originally published in 1903, this is a cracking novel, on the turn of the century British anarchist movement, and the role of women therein. The narrator, Isabel Meredith is the pseudonym of Helen and Olivia Rossetti, daughters of William Michael Rossetti and nieces of Dante Gabriel Rossetti. Their fin-de-siecle tenure as editors of the renowned British anarchist journal The Torch provided the experience that went into this entertaining and knowing novel. Includes an introduction by Jennifer Shaddock.” George Cores’ ‘Personal Recollections of the Anarchist Past’ (Kate Sharpley Library, 2000) — “Written in 1947 and then laid aside, these are recollections from the inside of the anarchist movement 1883-1939 by a forgotten veteran” — also provides an invaluable glimpse into this period of anarchist history.

On The Man Who Was Thursday, the Penguin edition (which features a Bonus! Introduction by Sir Kingsley Amis) describes it thus: “This hilarious extravaganza presumes the existence of a secret society of revolutionaries sworn to destroy the world. There are seven members of the Central Anarchist Council, who, for reasons of security, call themselves by the names of the days of the week – Sunday, Monday and so on. But events soon cast a doubt upon their real identities, for Thursday is not the passionate young poet he appears to be but a Scotland Yard detective. Who and what are the others? Chesterton unravels the fantasy in his own inventive and exuberant way and then uses this nightmare of paradox and surprise to probe the mysteries of human behaviour and belief.”

Chesterton himself was a Catholic, and a ‘Fabian’ (well, of sorts — he is normally associated with ‘Distributism’, a doctrine closely associated with Catholicism, and — bizarrely — now being championed by Kirkpatrick Sale). On Fabianism (vs. anarchism), see Owen Gager on Fabianism, Arena, and the Third Way (letters and debate). On the Jewish contribution to anarchism, see Jesse Cohn, ‘Messianic Troublemakers: The Past and Present Jewish Anarchism’, Zeek, April 2005. Freedom Press — originally established in 1886, the same year as the Melbourne Anarchist Club — is still kicking. (So too, the Melbourne Anarchist Club!) And — of course — the International Anarchist Conspiracy is alive, well, and coming to your town very, very soon…

A housing association has named two tower blocks after the leader of a gang of police killers. Painter House and Peter House in Whitechapel, East London, have been dedicated to Peter Piaktow – known as Peter the Painter. His gang of Russian anarchists shot dead three officers in Whitechapel in 1911 as they investigated a break-in at a jewellers. The Metropolitan Police Federation said the decision by Tower Hamlets Community Housing was “disappointing.”

I live in Melbourne, Australia. I like anarchy. I don't like nazis. I enjoy eating pizza and drinking beer. I barrack for the greatest football team on Earth: Collingwood Magpies. The 2023 premiership's a cakewalk for the good old Collingwood.
View all posts by @ndy →
This entry was posted in !nataS, Anarchism, Anti-fascism, History, Media, State / Politics, War on Terror. Bookmark the permalink.