If `Blood & Honour’ are so bloody honourable, how come they don’t advertise their gigs openly in the way that Antifa do? Instead the cowardly Nazis hide behind false names, mobile numbers, and re-direction points. The gigs are usually held in the worst shitholes imaginable, with the Fash hiding in dingy back rooms to listen to the dire wailings of untalented morons unable to get a normal gig. What a sad and pathetic spectacle. Still, one Leeds antifascist managed to get some sport outside Leeds Railwayman’s Club on Wellington Road when `Blub & Dishonour’ were in town for the night. Tracking the filth to their temporary lair, and spotting a couple of Nazis stupid enough to have strayed from it, our bold comrade set about the pair of them!

Spotted at the same gig was the lead singer of West Yorkshire Oi! band `Scum’. Many years ago, Ross was given a slap by Huddersfield AFA and made to burn all his Nazi gear. Since then, along with his cowardly mates, he’s gutlessly claimed to be “apolitical”. Unfortunately for Ross, the mugs at B&H have given the game away by posting up his pic on their own site. Ross has been in hiding since the news broke. Watch this space for what happens next!

Not that Ross is the only closet Nazi in `Scum’, nor the only one to come unstuck. We hope the rumours that you’ve thrown in the towel are true lads, and we really do advise you to `stay down’.

NB. Scum are available for purchase locally through Deadset Music. Unapologetic neo-Nazis Les Villains are also available, as are a range of titles from Belgian label Pure Impact. Like Ross, Fiona the owner of Deadset has attended B&H gigs in Melbourne. 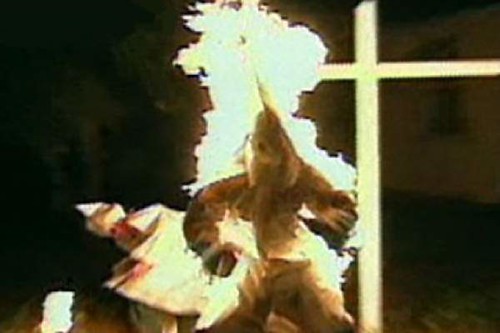 DENVER — The Denver police union is selling T-shirts that poke fun at protesters at last month’s Democratic National Convention… The back of the shirts reads “WE GET UP EARLY, to BEAT the crowds” and “2008 DNC” and has a caricature of a police officer holding a baton… Police arrested 154 people before and during the Democratic convention. There were few reports of violence. In once incident, an officer was videotaped pushing a protester to the ground with his baton and telling her, “Back up, [bitch].” The district attorney declined to prosecute the officer, saying the woman had disobeyed warnings to back away and had grabbed the officer’s baton… ~ Police Union Shirt Pokes Fun At DNC Protesters, thedenverchannel.com, September 29, 2008

Video of a “bitch” (likely a terrorist) at the DNC, disobeying warnings to “move away from the vehicle” (which she is clearly and illegally blocking the progress of), and then grabbing a brave and clearly at-risk police officer’s baton (look closely… See?). Oh, and then being arrested while addressing the media about other arrests (aka attempting to incite a riot in furtherance of terrorism):

I live in Melbourne, Australia. I like anarchy. I don't like nazis. I enjoy eating pizza and drinking beer. I barrack for the greatest football team on Earth: Collingwood Magpies. The 2023 premiership's a cakewalk for the good old Collingwood.
View all posts by @ndy →
This entry was posted in Anti-fascism, Music. Bookmark the permalink.