Update (October 19) : Poor old rich young Bill get arrest: Va. supremacist arrested, Associated Press: “A white supremacist has been charged with threatening a federal juror. Assistant U.S. Attorney Tom Bondurant says William White was arrested Friday and charged with obstruction of justice. White is commander of the Roanoke-based American National Socialist Workers Party. Bondurant says the charge involves threatening the foreman of a Chicago jury in the case of Matthew Hale, who was convicted in 2004 of soliciting the murder of a federal judge. Hale was the leader of the World Church of the Creator, which held similar neo-Nazi beliefs as White’s organization. White told The Roanoke Times that he had posted information about a juror on his Web site, Overthrow.com, but that he had made no threats. White was being held without bond on Saturday.” Neo-Nazi arrested, jailed on federal charge: “William A. White of Roanoke has been charged with obstruction of justice, an assistant U.S. attorney says”, Laurence Hammack, The Roanoke Times.

In other words: White’s Web site closed by FBI: Overthrow.com has been off-line since federal officials seized computer equipment. “Oct 17, 2008 (The Roanoke Times – McClatchy-Tribune Information Services via COMTEX) — Federal agents have reportedly seized computer equipment from a Roanoke-based white supremacy group, at least temporarily shutting down a Web site used to spout racist rhetoric. Overthrow.com, which is run by William White, the commander of the American National Socialist Workers Party, has been off-line since last weekend…” No doubt William will be back to his old tricks in a few days.

On a related note, because the ANSWP asks whether that “nigger” Obama oughta be killed — and well I saw it on the television…

“Niggers Ain’t Gonna Run This Town”: Militancy, Conflict and the Sustenance of the Hegemony in Bogalusa, Louisiana
Seth Hague

The battle for civil rights in Bogalusa, Louisiana was a struggle for power, but it was different from the prototypical struggles in the agricultural South during the 1960s. Industrialization is the main reason for this difference, as the black laborers met challenges distinctly different than the problems associated with the struggle in the agricultural South. Oppressed rural black populations were much more inclined to follow the leadership from groups like CORE and SNCC, whereas the laboring class of blacks in industrialized towns such as Jonesboro and Bogalusa fought themselves for power and demanded that outside coalitions like CORE follow them. They exercised militancy, embedded in them as the result of the rigid class-consciousness imposed by an oppositional white power structure, through an armed self-defense organization they created known as the Deacons for Defense and Justice. The efforts already made by the Jonesboro black laborers, entrenched in a similar situation in another industrialized Louisiana mill town, further inspired militancy in Bogalusa. Once Crown-Zellerbach laborers A.Z. Young and Robert Hicks assumed leadership of the (all-black) Bogalusa Civic and Voters’ League, the community came to embrace the militant rhetoric of the Jonesboro Deacons. Many violent conflicts ensued under this ideology and culminated in a climactic summer in 1965. Consequently, the black workers’ militancy threatened not only the power of the middle class blacks, but also the political and economic hegemony of the white power structure in Bogalusa. Except for a few noteworthy courtroom “victories” versus Crown-Zellerbach, threatening the power structure was virtually the struggle’s only effect as the white power structure subsumed the militancy and rhetoric of the revolutionary Bogalusans… 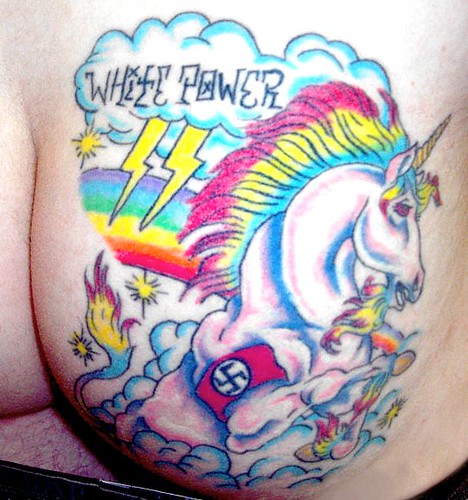 I live in Melbourne, Australia. I like anarchy. I don't like nazis. I enjoy eating pizza and drinking beer. I barrack for the greatest football team on Earth: Collingwood Magpies. The 2021 premiership's a cakewalk for the good old Collingwood.
View all posts by @ndy →
This entry was posted in Anti-fascism, Media, State / Politics. Bookmark the permalink.