Despite much wailing and gnashing of teeth online, when it came down to it, local fascists proved to be rather unreliable when it came time to taking their cause to the streets of Melbourne yesterday afternoon, with their main contribution to the cause of White supremacy being the drunken sieg heiling of a neo-Nazi skinhead belonging to the local Hammerskins chapter.

Speaking of Hammerskins, next Saturday on the Gold Coast they and their comrades in Blood & Honour will be celebrating the many achievements of the Master Race (including, presumably, Adolf Hitler‘s success in blowing his brains out while hiding in a bunker, Ian Stuart Donaldson‘s driving skills and Nicky Crane‘s love of a bunch of dicks and sticks). In celebration of the roaring success that will be Hammered, word on the street is that Victorian B&H organiser Justin O’Brien will be offering a 50% discount on all swastika tattoos (and labia piercings) THIS WEEK ONLY, so run don’t jackboot down to Hold Fast Body Art in Burwood.

Somebody put chewy on Collingwood’s boots prior to the game against St Kilda, meaning that come the final siren, the boys managed to kick four goals and seventeen behinds, not one of them belonging to St Kilda.

Anyway, Jon Brooks, Toby Halligan, Courteney Hocking, Nazeem Hussain, Mathew Kenneally, Ben McKenzie, Rod Quantock and Aamer Rahman were joined on stage by an international guest comedian / Arj Barker impersonator aka Jamie Kilstein, whose mimicry of Barker’s unique comedy stylings left me feeling somewhat unconvinced. Besides that, MC Kenneally made some brief though humorously disparaging remarks regarding Vindaloo Against Violence, while Nazeem Hussain also made reference to the failed attempt by white supemacists to march on Parliament earlier in the day. 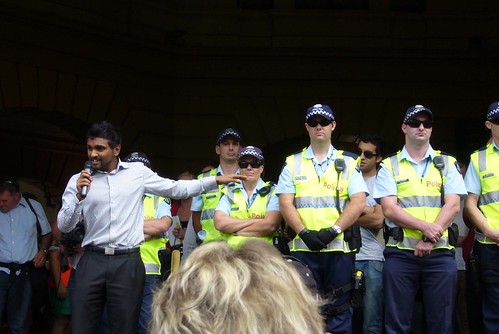