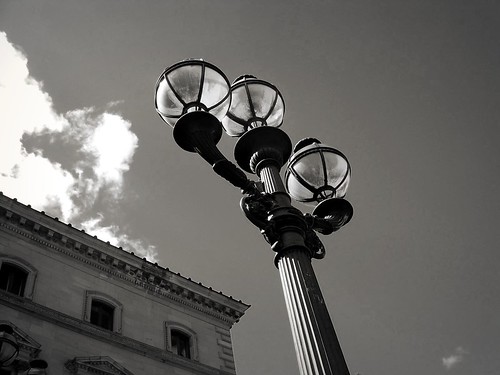 Both the hoi polloi and the chattering classes have been whipped up into a frenzy by the Victorian bushfires.

Professional scribbler Miranda Devine is typically subtle when it comes time — as it must — to apportioning blame: ‘Green ideas must take blame for deaths’ (The Sydney Morning Herald, February 12, 2009).

In essence — the Devine Miss M argues — it wasn’t climate change or arsonists what killed perhaps as many as 300 people. “It was the power of green ideology over government to oppose attempts to reduce fuel hazards before a megafire erupts, and which prevents landholders from clearing vegetation to protect themselves” what done it.

The submission by the TCA is available here [PDF].

Whatever Scott may have said during his personal testimony (from which Miranda quotes), he did not consider it appropriate to include in his/the TCA’s written submission, the Summary of which reads:

The fires of 2006/7 were mainly in forested areas. Be it dumb luck or good management only one life was lost. Successive dry years may have added fuel to the fire but it also restricted fire movements as many pastured areas were only stubble and not the long dry grass of past years.

This committee into the issue of fire management has an opportunity to review many of the procedures regarding the fires. I have only scratched the surface as to the many simple complex issues around fire management but there has been a clear message from many of our members.

The power of green ideology over government to oppose attempts to reduce fuel hazards before a megafire erupts, and which prevents landholders from clearing vegetation to protect themselves, is the reason many people will die in future bushfires.

They believe it is time to look at changing management practices for all the forest estate and bring in a system for active forest management. It is time that communities in these areas are given a greater say in decisions that directly place their communities in jeopardy.

The voice of country people is often drowned out by the noise of the city especially yuppie columnists from Sydney’s North Shore. You have an opportunity to make sure their voice is heard within Government.

If there is an opportunity to discuss these simple complex issues further TCA would appreciate the chance as this paper does little justice to the angst and pain felt in many rural communities.

The other expert Devine cites is Dr Phil Cheney. Coincidentally, Dr Phil is cited with approval by Scott/TCA, and was once a member of ‘The Stretton Group’, which he/TCA describe as “an apolitical, not-for-profit group” comprising “a disparate association of volunteers” — which is precisely how “The Stretton Group” describes itself.

The Stretton Group’s first publication is titled ‘”The Green Inferno”: The Politics of Bushfires and Conservation’, and is a transcript of an address Dr Phil gave at the Group’s inaugural meeting on Thursday, 25th November, 2004. It’s available for download from the Institute of Public Affairs [PDF].

The address is not a scientific paper, but a bland argument in favour of encouraging responsibility for fire management among diverse ‘land management agencies’. Cheney makes reference to “the problems that have arisen out of the rapid expansion of conservation reserves in the last 25 years”, but does not blame ‘green ideology’ as such. Rather: “The land grab for conservation reserves provided the opportunity to place management over much of the formerly “unprotected land” but it was not accompanied by the funding needed to implement management. Instead government took the opportunity to reduce expenditure on fire protection by their land management agencies.” (Dr Phil also reckons “Forestry has been a convenient whipping boy for governments attracted by the votes of the green revolution”.)

Guy Rundle (The Australian‘s fuel reduction obsession, Crikey, February 12, 2009) can has some facts:

1. The pros and cons of burning off are heavily debated among bushfire specialists.
2. Forest fuel levels have no effect on fire speed, which was the main killer in these fires.
3. Dryness is a contributor to fire speeds.
4. Forestry activities may promote dryness by thinning forest canopies.
5. Climate change may be a factor, and if it is, a different set of strategies will need to be employed than if it isn’t, so it’s worth debating.
6. Fires of the “Black Saturday” intensity burn through burnt-off bush because they move at crown and canopy level.
7. The burn off levels advocated by green groups are of the same order as those advocated by those bushfire experts who believe that higher burn-off levels increase risk of fire without giving consequent benefit.
8. Burn-off levels do not play a role in urban green votes, and they never have.

In any case, while experts disagree over whether “prescribed burning” is The Magic Bullet, I think the simplest solution is to cut down all the trees.

In addition to Dr Phil, the other members of the Group are Simon Paton, bushfire and forestry experts Peter Attiwill, Athol Hodgson and David Packham, Bill Middleton, Tory politician Stewart McArthur (whose daddy Sir Gordon Stewart McArthur (1896 – 1965) was also a farmer and a Tory MP) and lawyer and “iconoclastic” thinker Tony Cutcliffe.

Simon Paton is a farmer. Devine may have had Simon in mind when she concluded her article (“There is an opening now in Victoria for a predatory legal firm with a taste for David v Goliath class actions”) as Simon has been down this road before: “A group of Victorian farmers says it will sue the State Government over its handling of last summer’s bushfires. The group is preparing a class action which alleges the State’s Department of Sustainability and Environment was negligent because it didn’t do enough to prevent or control the fires, which they say have put some farmers out of business” (Farmers pursue class action against Vic Govt, AM, December 2, 2003, Reporter: Ben Knight).

In fact, a month prior to Devine’s scribbles, another class action was announced. “MELBOURNE lawyer Charles Slidders is taking legal action on behalf of farmers against the Victorian Government over losses from the 2003 and Grampians fires… The writ follows a threat made by Mr Slidders in The Weekly Times in early 2007, that he would take legal action if the Government failed to compensate farmers” (Writ seeks fire compo, Peter Hunt, The Weekly Times, January 8, 2009).

…Slidders’ writ follows the failure of an earlier attempt by the Stretton Group to seek compensation on behalf of farmers whose land was devastated by the 2003 fires. The Stretton Group, comprising mainly fire and land management experts and farmers, began a statement of claim against government agencies in 2004, alleging they were liable for the size and severity of the fires. The group did not take legal action, but did pass its statement of claim on to Slidders. However, Stretton Group member Simon Paton said he knew little about the Slidders writ. Daniel Oldham, a partner at Slidders Lawyers, told media last week the case was in its infancy. The Government has repeatedly denied there is a valid legal claim in regard to compensation for the impact of bushfires.

Simon is/was also the Convenor of ‘The Eureka Project’, of which Tony Cutcliffe is/was a director. In his capacity as Convenor, Simon authored ‘A Case of Burning Neglect: A report from North East Victorians regarding the 2003 bushfire crisis’, April 30, 2003 (available as as PDF from The Eureka Project).

Athol Hodgson is a member — along with half ‘The Stretton Group’ — of yet another industry lobby group, ‘Forest Fire (Vic) Inc.’. Curiously, contra Devine, this mob is full of praise for the Victorian Government: “The Findings are free from political bias. The Recommendations are specific to core issues, unequivocal, and in the view of Forest Fire Victoria, attainable. The use of knowledge and experience of people outside government agencies is especially commendable.”

In addition to murderous green ideology, Devine makes explicit and unflattering reference in her article to Nillumbik Shire Council, “A council committed to reducing carbon emissions”.

Nillumbik Shire has seven councillors; none are Greens.

(Yarra Ranges Shire has nine councillors, only one of whom — Samantha Dunn — is a Green.)

The Victorian Government can has three Green MPs, all Members of the Upper House: Greg Barber, Colleen Hartland and Sue Pennicuik. The other 37 members are non-Greens. In the Lower House, there are 0 Greens and 88 non-Greens MPs.

Of course, Devine & Co. are less interested in averting future environmental disasters so much as pursuing an ideological war against those deemed enemies; forces which threaten to derail the wholly rational and completely sensible development of Australia’s abundant human (and other natural) resources for the benefit of the elites who own and manage them.

To paraphrase a Great Thinker, if politicians are intent on whipping up a lynch mob to divert attention from their own culpability, it is not greenies who should be hanging from lamp-posts but neo-conservative columnists.

Of course, I am not urging anyone to commit violence against a “journalist”.

Meaning the Divine Miss M is in mortal danger.

Hell hath no fury like a vested interest masquerading as a moral principle.