Eden Abergil : “IDF – the best time of my life” 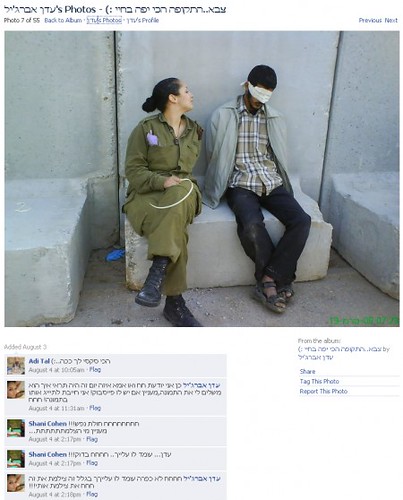 “War is not a polite recreation but the vilest thing in life, and we ought to understand that and not play at war. Our attitude towards the fearful necessity of war ought to be stern and serious. It boils down to this: we should have done with humbug, and let war be war and not a game. Otherwise, war is a favorite pastime of the idle and frivolous … there is no profession held in higher esteem than the military. And what is war? What makes for success in warfare? What are the morals of the military world? The aim and end of war is … murder; the weapons employed in war are espionage, treachery and the encouragement of treachery, the ruining of a country, the plundering and robbing of its inhabitants for the maintenance of the army, and trickery and lying, which all appear under the heading of the art of war. The military world is characterized by the absence of freedom—in other words, a rigorous discipline—enforced inactivity, ignorance, cruelty, debauchery, and drunkenness. And yet this is the highest caste in society, respected by all.

Every monarch in the world, except the Emperor of China, wears a military uniform, and bestows the greatest rewards on the man who kills the greatest number of his fellow creatures. Tens of thousands of men meet—as they will tomorrow—to massacre one another: to kill and maim, and then they will offer up thanksgiving services for having slain such vast numbers (they even exaggerate the number) and proclaim a victory, supposing that the more men they have slaughtered the more credit to them. Think of God looking down and listening to them!” cried Prince Andrei in a shrill, piercing voice.

I live in Melbourne, Australia. I like anarchy. I don't like nazis. I enjoy eating pizza and drinking beer. I barrack for the greatest football team on Earth: Collingwood Magpies. The 2023 premiership's a cakewalk for the good old Collingwood.
View all posts by @ndy →
This entry was posted in Broken Windows, Death, Media, State / Politics, That's Capitalism!, War on Terror and tagged Eden Abergil. Bookmark the permalink.

2 Responses to Eden Abergil : “IDF – the best time of my life”